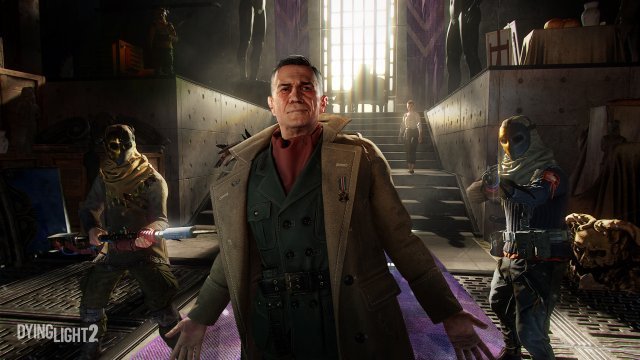 The ambitious Dying Light 2 is on its way home: After a long period of radio silence, the open-world action game is set to debut December 7th — for PC, PS5, PS4, Xbox Series X/S, and Xbox One. With the release announcement, the developers broke their silence and have been providing fans with new information and impressions about the game ever since. Techland has now published another gameplay video in which you get to know another side of the open world zombie game: in less than 5 minutes, you can see how protagonist Aiden Caldwell and his companion have to sneak through a pitch-black zombie nest in an abandoned GRE hospital.

05:13
Dying Light 2: The gameplay trailer introduces monsters – not for the faint of heart

Aiden himself is infected with the zombie virus and hopes to find a so-called vital sign in the clinic, a bracelet that will show him the degree of his infection. If Aiden reaches the red zone, he desperately needs to refuel with UV to prevent himself from turning into undead. In the course of the video, not only are four new (and disgusting) types of enemies introduced, but you also finally see how Aiden has to traverse enemy crowds out in the open in a nerve-wracking escape sequence.

The gameplay video was presented as part of Techland’s “Dying 2 Know” information show. If you want to watch the second episode in its entirety, you can find the video here:

Suitable for this: The first light dying in the test

Despite this indoor use, Dying Light 2 (Buy now €79.99 ) Above all, relying on an open world in which people are outdoors during the day while the infected fill the streets at night. During the game you will meet different factions with different goals. In many missions, you must be able to make important decisions that affect the story and the game world. The gameplay of the previous course, based on Mirror’s Edge, is also expanded, and Aiden should have more moves and opportunities to conquer the detailed game world. As in the first part, there will be extensive crafting and distinct role-playing elements.