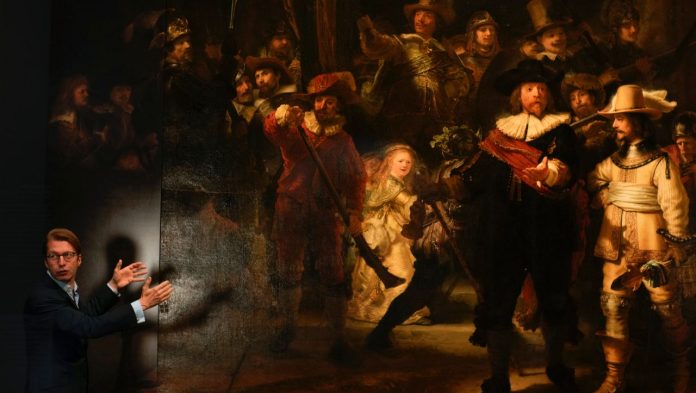 For the first time in more than 300 years, Rembrandt’s famous masterpiece “The Night Watch” can be seen in full once again. With the help of modern technology, the Amsterdam Rijksmuseum reconstructed the missing pieces and presented the painting in its original form on Wednesday. The masterpiece, with its reconstructed parts, will be on display to the public for three months.

Rembrandt completed the painting by the Amsterdam Guild of Rifles in 1642. In 1715, the oil painting, which was more than 20 square metres, moved to another building. And because it did not fit where it was intended, the pieces were cut on all sides. As a result, three numbers on the left side are omitted.

In the reconstructed state, the painting has “much more dynamism and movement,” said Tako Dibbets, director of the Rijksmuseum. “It is wonderful to see with my own eyes how Rembrandt meant ‘Night Watch’.”

Over two years ago, the museum began its largest study to date of the painting, which has been celebrated as a groundbreaking one for its illumination, dynamism and the effect of depth. A comprehensive restoration is now being performed based on the results.

See also  "The Ultimate Chart Show - The Most Successful ABBA Song Ever" on RTL Live and on TV: This is how you see the chart appear

Lucky Stars: The ProSieben Show brings it to the studio! ...