Home Tech Google is back on the right track: Android Auto adapts to any... 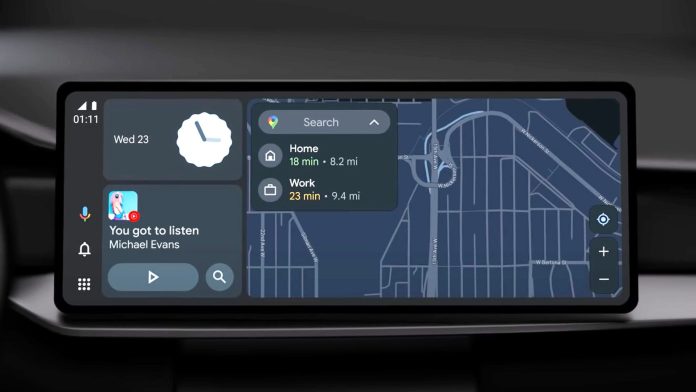 Google announced several updates to its software services at I/O 2022. Chief among these is the redesigned Android Auto. The update will finally allow the interface to adapt to any screen size. This also supports funky aspect ratios and smaller screens, which are mainly found on older cars.

It took Google a few tries to make Android Auto less annoying and smoother. The company says the next update to its in-car infotainment software will get rid of the annoying letterbox formatting on some older screens. More importantly, Android Auto gets an overhaul in terms of interface and functionality.

The next iteration will see the biggest change to the user interface. The default view now shows rectangular widgets in three sizes, with the main window dedicated to navigation and the other dedicated to the media player and communication.

Thus, the car’s three most-used areas are displayed at all times – meaning you’re less distracted behind the wheel. There is a fixed bar with shortcut icons and status information on the lower or left side depending on the vehicle’s display size or orientation.

In particular, users can now pass the estimated time of arrival to their contacts without having to leave the view. Google has placed great importance on the fact that you have to navigate through menus as little as possible when using Android Auto. So if you make calls or send texts, if you want to change the music or use navigation: it all happens in this three-part view without having to go back to the main screen in between.

When will the latest Android Auto update come with an adaptive display?

Google hasn’t given a specific date, it’s only talking about a release in the summer. Android Auto has seen a wild ride and tweaks that aren’t always comprehensible. It seems that Google is now back on a clear and understandable path. As soon as new functions become available, we will tell you here.

In your opinion, which infotainment system has a versatile user interface and does Google or Apple lead the pack in the car? Let us know in the comments section.