Home World A protest against environmental policy: a massive human chain around the Mar... 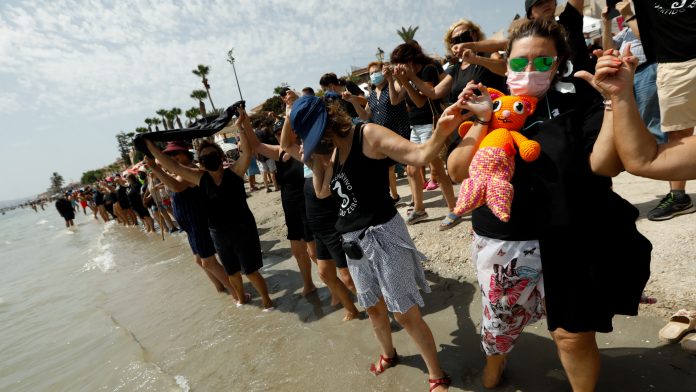 Europe’s largest saltwater lake is about to collapse: tons of dead fish are washed up on the shores of the Mar Menor – the reason is intensive agriculture. Now 70,000 people have protested the environmental policy.

In protest of one of Spain’s worst environmental tragedies in recent years, 70,000 people symbolically embraced Europe’s largest saltwater lake. Spanish media reported that they formed a human chain around the entire Mar Menor, 73 kilometers away.

Participants wore black T-shirts to express their grief over the destruction of the environment. They called on politicians to do something about the situation. A minute’s silence was also observed by the thousands of animals who fell victim to water pollution. A coalition of conservation groups and local people called for action.

Last week, nearly five tons of dead fish and crustaceans washed up on the beaches of Mar Menor, the “little sea,” in the Murcia region of southeastern Spain. This wasn’t the first mishap in what was once a nature and holiday paradise. Almost two years ago, for example, almost three tons of dead lake dwellers were washed away – mostly small fish and crabs.

The cause of the mass extinction of fish is the so-called eutrophication. It is caused by human activity. Environmentalists complain that due to the industrial cultivation of the area, the low-content mud enters the lake repeatedly. The nitrates and phosphates ensure the algae’s wide spread and deprive other plant species, fish and small organisms of oxygen.

Higher temperatures speed up the eutrophication process. A few days ago, the temperature rose to more than 40 degrees in the Murcia region. This makes the water in the Mar Menor warmer and the oxygen content even lower.

The government decided the conditions

The Mar Menor was once considered one of the most beautiful regions in Spain. Today there is only “green soup” that can be seen, which gives off an unpleasant smell. The conservative regional government and the left-wing central government blame each other.

From the Roman and Etruscan Periods: Italy Returns Millions of Treasures...