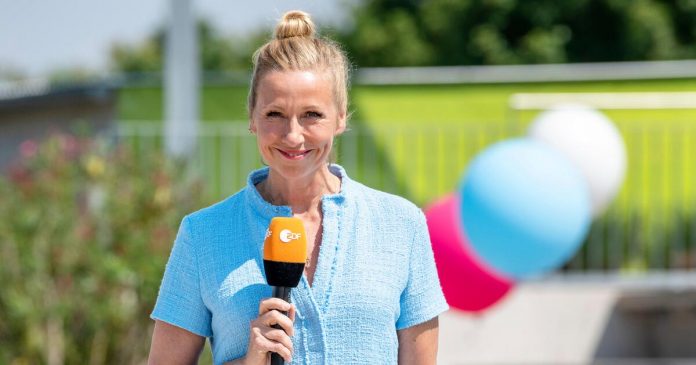 The “ZDF-Fernsehgarten” could not have been held on Sunday, July 4th as usual. A thunderstorm warning caused the shipment to fail. At first it all started as usual: the first two guests of the show, Michel and Mike Leon Grosch, performed at the Lerchenberg in Mainz. But after only 15 minutes, the spectators had to be brought to safety.

“That’s the great thing about live TV,” said host Andrea Kewell brilliantly. “For the first time in a year and a half, there are already many viewers again, about 400 viewers. Once the show starts, we bring viewers to safety.” Because of a “warning of a heavy thunderstorm over the Lerchenberg River”, the program was unable to continue as planned.

While all viewers moved to Meistermannhalle, broadcasts continued in the garden hut. From the large hall of the ZDF building, the live audience can only watch the show on screen. The presenter of the program tried to please her audience, “It will not last forever, only for a very short time. It will pass, it will last, and then we will meet again here.”

But after only about an hour and a half all clarity can be presented. At about 1:30 p.m., Kiewel, guests, and the public were able to return to the outdoors. Just in time for Stevy Wilhelm’s appearance, “ZDF TV Garden” continued abroad. “Thanks to the crowd for standing up. You could have come home. Great!” Kiewel thanked the audience afterwards.

The program kicked off the summer season in May, and since then “ZDF TV Garden” has started as a live outdoor show on Lerchenberg in Mainz. The season ends on September 26 with an anniversary issue. The broadcast celebrates the 35th anniversary of “ZDF TV Garden”.
© 1 & 1 Mail & Media / spot on news

A few weeks after the scandal surrounding his appearance at “The Garden of Television,” Luke Mockridge made a peace proposal to Andrea Kewell. His actions on the Sunday show, in which he told uncomfortable jokes, were not well received by the presenter or viewers. (Trailer image: Photo Alliance / dpa) © ProSiebenSat.1