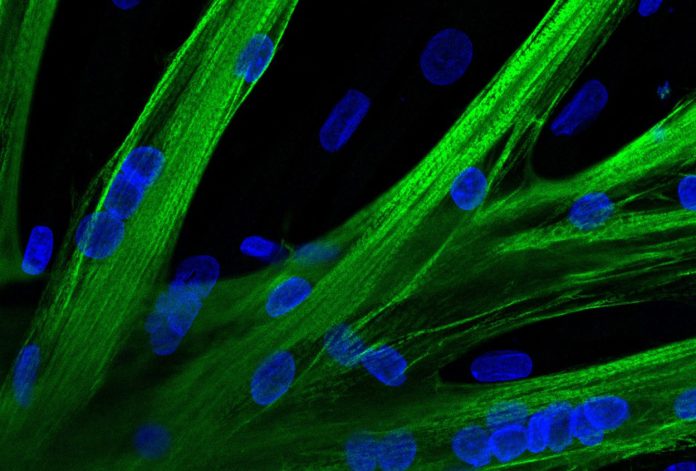 Most forms of muscular dystrophy are caused by a single defective gene. However, the progressive muscle wasting has not yet been cured. The researchers have now laid the foundations for a potential therapeutic approach: With the help of mRNA, they have inserted scissors of the CRISPR/Cas9 gene into human muscle stem cells. In this way, they were able to fix the faulty gene. In cell culture, the repaired stem cells successfully form muscle fibres. Clinical trials in patients should be pursued.

A small change in the genome can have serious repercussions. In nearly all of the 50 known forms of muscular dystrophy, a single gene mutation means that certain proteins essential for muscle metabolism are missing. As a result, muscle tissue breaks down over time, resulting in muscle weakness and eventually the inability to move, swallow, or hold objects on their own. Existing medications can delay the progression of the disease and increase the life expectancy of those affected. Muscular dystrophy has not yet been treated.

For treatment it will be necessary to repair the defective gene. A team led by Christian Stadelmann of the Center for Experimental and Clinical Research (ECRC) of the Max Delbrück Center for Molecular Medicine (MDC) and Charité – Universitätsmedizin Berlin is now investigating the possibility of such a gene therapy. “For years, we’ve been pursuing the idea of ​​taking muscle stem cells from patients, repairing the altered genes using CRISPR/Cas9 gene scissors and injecting the treated cells back into the muscle so they multiply there and form new muscle tissue,” explains Stadelmann colleague Helena Escobar.

In the current study, the researchers took muscle stem cells from donors of different ages and genders. The researchers used mRNA to smuggle the construction guide of the CRISPR/Cas9 gene scissors into cells. In previous experiments on mice, they used so-called plasmids – double-stranded, ring-shaped DNA molecules from bacteria – instead of this messenger RNA. In contrast to single-stranded mRNA, there is a risk with plasmids that it will inadvertently integrate into the human genome and lead to unwanted effects. “So we weren’t able to treat patients that way,” Escobar says.

On the other hand, mRNA is split in the cell after a short time. Thus, mRNA-mediated delivery provides a platform to stimulate the cell to produce gene-modifying enzymes for therapeutic genome-editing applications in a time-limited manner and without the risk of integration into the genome. In doing so, they rely on a principle similar to that used in the mRNA vaccine against the coronavirus. “The mRNA molecules in vaccines contain the genetic information to build the spiky protein of the virus, with which the pathogen penetrates into human cells,” Stadelmann explains. “For our purposes, we use mRNA molecules that contain instructions to build gene scissors.” Unlike vaccines, which cannot alter human DNA, genetic scissors can repair faulty genes in a targeted manner.

So that the mRNA could reach the cells, the researchers temporarily made the cell membranes of the removed muscle stem cells permeable to the larger molecules. To do this, they used a process called electroporation, in which they applied an electric field to the cells and thus temporarily changed the properties of the membrane. They used a trick to check if the mRNA was actually absorbed: “Using the mRNA, which contains the genetic information of the green fluorescent dye, we were initially able to demonstrate that almost all stem cells absorb the mRNA molecules,” Stadelmann reports.

See also  Covid-19: Three questions about the variable in the origin of the mass in Brittany

To demonstrate that it is indeed possible to modify the genomes of cells in this way, the researchers used genetic scissors to alter the gene for a surface molecule of muscle stem cells. This molecule has no effect on cell function, but it is easily detectable. In fact, they succeeded in making targeted changes in the gene made visible through a change in surface molecule expression. Tests using another molecular genetics tool, which, unlike CRISPR/Cas9 gene scissors, does not cut DNA, but instead swaps the base with pinpoint precision, have also been successful. In cell culture, genetically modified muscle stem cells were able to fuse with each other and form young muscle fibers, just like healthy muscle cells.

“We now plan to start the first clinical study with five to seven patients with muscular dystrophy by the end of the year,” says Simon Koehler, Stadelman’s fellow. Muscle stem cells must be removed from patients, repaired and then transplanted back into the muscle – similar to what the researchers have already tested in mice. First of all, this method is only suitable for repairing small muscles. “Patients who use a wheelchair will not just get up and start walking after treatment,” Koehler says. But for many sufferers, it’s a huge step forward when a small muscle important for grasping or swallowing, for example, works better again.

In the longer term, the researchers also want to develop ways in which molecular tools can be inserted not only into isolated muscle stem cells, but directly into muscle. In this case, it may also be possible to repair larger muscles such as those needed for standing and walking.

Is zinc related to the formation of kidney stones?