Home entertainment Thriller on Sunday evening: The new movie “Polizeiruf 110” is an interrogation... 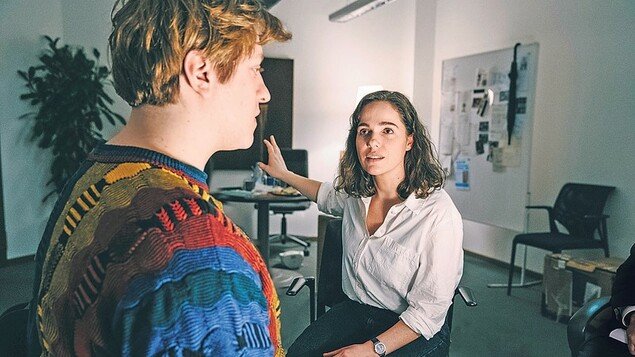 Elizabeth “Bessie” Eyckhoff (Verena Altenberger) arrives on the killing squad after various stations with the Munich police. But in the new “Call of the Police” episode, time works against the supervisor. Within two hours she must convict alleged killer Jonas Borota (Thomas Schubert) – or let him go. Those arrested must either be brought before an investigative judge or released after the next day.

No wonder the homicide officer had a frenzy when his fellow policeman accurately noted Boruta’s arrest time: 11:55 p.m. Five minutes later, investigators had an extra day to collect evidence. Since the evidence against Boruta is not sufficient to issue an arrest warrant, Commissioner Eckhoff has to persuade him to make a confession by midnight (“Call the police at 110 – until midnight,” Sunday, ARD, 8:15 p.m.).

In the fourth episode “Polizeiruf 110” with Verena Altenberger, this time screenwriter Tobias Kniebe used pressure, which the police are also subject to in reality, for a thrilling, almost real-time interrogation drama.

It is adapted from an episode of the book “The Abyss: When People Become Murderers” by Joseph Wellfling, longtime head of the Munich homicide squad. Knieben does not insist on telling a “true story,” as is often claimed in the fictional world. He changed crucial aspects of the case and made them unknown.

In addition, Dominic Graf made a “police call” in Munich with Verena Altenburger for the second time. The 68-year-old Grimme 11 winner has once again added to his already impressive feat of outstanding police films.

The episode is more than a psychological duel in a room-playing setting, namely one of those unique compositions by Graf that draws the audience into the bleak rooms of the police station, in the frenetic atmosphere of the team’s work and in the alleged emotional abyss. the criminal.

See also  No photoshop: Selena Gomez posts a bikini selfie with a scar

Plus, it’s subtly interspersed with flashbacks and photos that capture Munich’s melancholy at night. The sound for this is provided by the music of Florian van Volksem and Sven Rosenbach, who worked with the director on the series “In the face of crime”.

Verena Altenberger plays Bessie Eyckhoff as if she is under power, in a hurry, giving everything. As a new classmate and the only woman, she is under special surveillance. But as a self-confident and ambitious police officer, she also puts herself under pressure. Dare to do it, she says, “I can break it.” Then, to her great disappointment, she was deserted.

Your boss Martin Schaub (Christian Baumann), in consultation with Attorney General Sarah Ehrman (Berg Shady), brings back your predecessor Joseph Mornauer (Michael Ruhl). Mornauer, who has taken time off due to his wife’s cancer, is sitting in the hotel bar where his daughter works.

While waiting for the call that will bring him back to the game, he looks at TV images of a volcanic eruption. Meanwhile, a flashback shows the first victim dying in the snow-covered plains of Isar.

The metaphor of fire and ice fits well with Eyckhoff’s angry metaphor, which the prosecutor takes to her chest for lack of solidarity with women. Then she’s back, drawing board, conscious, and professional. Mornauer is confident enough to use his teammate’s skills. It’s good that there’s no goofy gender conflict going on here – and Michael Rolle could really shine in this supporting role alongside Altenberger.

Old and young become a team because they both find a special way for a highly intelligent suspect. Jonas Boruta was already in the sights of the police when the dead woman was found in the Isar floodplain. Mornauer found no evidence. Now student Susan Michel (Emma Jane) is attacked in the dormitory and seriously injured with a knife. Both women were not raped; Eckhoff suspects that the only strange man, Boruta, has sexual motives. Time is of the essence, Boruta seems to know that he only has to hold out until midnight.

See also  Cars comparison: this is why Wincent Weiss' first name starts with the letter W

Dominique Graf defiantly wrote in a press release “Long Live the Police,” in which, quoting François Truffaut, he defends the genre against critics “Oh again, another crime howl.” At least this Sunday Graff’s right: There’s no reason to shout and groan.