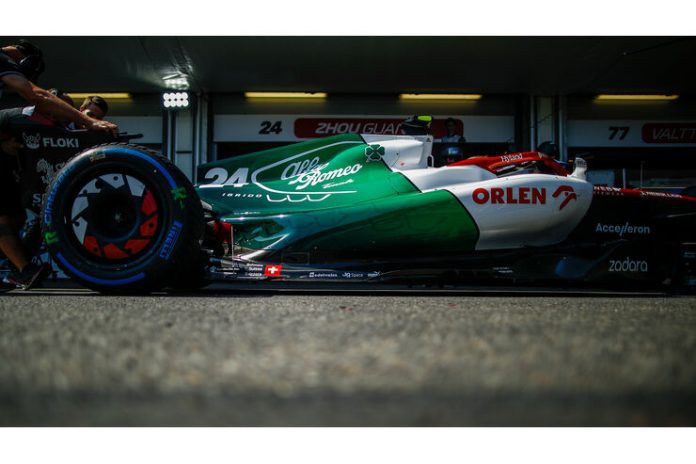 Alfa Romeo will compete with a fresh look at the Azerbaijan Grand Prix. The C42 was given an all-green tail of the Baku flight to complement the colors of the Italian flag. We show you the first pictures of the new car body.

The ten Formula 1 teams have used the colors very sparingly this year. Recently, every gram of excess paint has been scraped off on many cars in order to save weight. The only 2022 generation model that was below the limit from the start was the Alfa Romeo C42. During development, engineers in Hinwil, Switzerland, made sure that the new racer wouldn’t suffer from overweight.

With the exception of some visible carbon on the sides of the cockpit, the Valtteri Bottas and Guanyu Zhou cars are completely wrapped in the traditional Alfa Romeo Motorsport color scheme: red at the front, white in the center, and red again at the rear. You’ll have to get used to a new one for next weekend’s race to get used to the look. The PR department made the race car for the Azerbaijan Grand Prix even more lively.

Italian flag on the C42

In addition to the red and white, there is now a large green area on the bonnet at the rear. The C42 will move through the streets of Baku in the guise of Italian tricolor. By the way, the timing of the special coating is not accidental. Alfa Romeo celebrates the launch of the Tonale road model. The new SUV will be in European dealer showrooms for the first time this weekend.

The letters “Tonale” aren’t the only thing on the green area at the back. You can also see the production car’s distinctive headlight appearance. The new race car color scheme was developed at the Italian carmaker’s Centro Stile. Sauber and Alfa Romeo once again emphasized the good and successful collaboration between the two partners when introducing the paint.

The look can be seen briefly on Thursday during the first practice session in front of the team garage. On Friday afternoon, the pilots will take to the slopes for the first time in their modified races. In the gallery, we already show you some impressions of the new look.