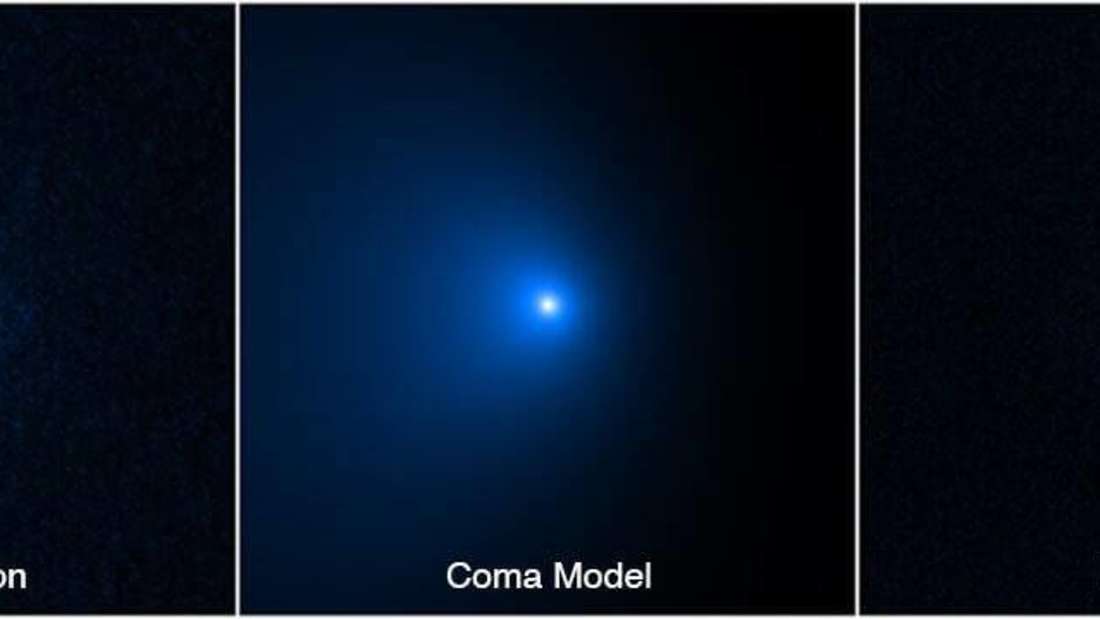 NASA’s Hubble Space Telescope confirms what researchers have long suspected since its discovery: Bernardinelli-Bernstein is the biggest source.

LOS ANGELES – Shortly after the discovery of Comet Bernardinelli-Bernstein (C/2014 UN271) in the summer of 2021, one thing was clear: the comet is massive. “We may have discovered the largest comet ever seen,” said Gary Bernstein, who found the comet with his colleague Pedro Bernardinelli. Since then, the comet has been spotted regularly. A new study now confirms what researchers already expected after the first sighting of the comet. “We always suspected that this comet must be large because it is so bright at such a large distance. Now we can confirm it,” explains astronomer David Jewett of the University of California Los Angeles (UCLA).

Jewett participates in a study of Comet Bernardinelli-Bernstein Published in Astrophysical Journal Letters has become. The comet is “an amazing body considering how active it is despite being far from the sun,” said the study’s lead author, Man Tu Hui of the Macau University of Science and Technology in Taipa. Bernardinelli amber is currently located about three billion kilometers from Earth, and is moving through the solar system at a speed of about 35,000 kilometers per hour. “We suspected that the comet might be very large, but we needed the best data to confirm that.” To obtain this data, the research team used NASA’s Hubble Space Telescope.

On January 8, 2022, the Space Telescope captured five images of the comet that is currently heading toward the center of the solar system. The researchers’ goal: to find out the size of a comet’s nucleus – a very difficult task because the celestial body is so far away. Even in the Hubble images, it is very difficult to distinguish the solid core of a comet from the coma around it – a diffuse, hazy envelope that can stretch over millions of kilometers. Hoy researchers eventually created computer models to distinguish nuclei from coma.

The comet’s nucleus is “larger and darker than coal,” Jewett said in a statement from his university. Researchers estimate that the comet’s nucleus is between 119 and 137 kilometers in diameter – the previous record holder was Comet C/2002 VQ94, whose nucleus is about 96 kilometers wide. Bernardinelli-Bernstein is more than 50 times larger than the nuclei of most known comets, NASA explained in a statement. Also, according to the research team’s calculations, Comet Bernardinelli-Bernstein has a mass of 450 trillion tons – 100,000 times the mass of a typical comet closer to the Sun.

Comet C/2014 UN271 comes from a region at the edge of the Solar System, the Oort Cloud. The current research view is that there are trillions of comets out there. The Oort cloud is said to be about 300 to 750 billion km away from the Sun. It derives from a theory by Dutch astronomer Jan Oort from 1950. Because the comets in it are so distant and shine so faintly, the Oort cloud has not been observed to this day – but it is considered the largest structure in the Solar System.

Comet Bernardinelli-Bernstein has been moving away from the Oort Cloud for more than a million years and is heading toward the Sun. Its elliptical orbit around the Sun will take it to its closest point to the Sun, known as perihelion, in January 2031. The comet will then remain about 1.6 billion kilometers from the Sun. Before that, it must have never come close to the Sun as comet discoverers Bernardinelli, Bernstein, and other researchers wrote in a study. “In fact, this may be the most primitive comet ever observed,” she says.

Comet is “freezing” of the composition of the solar system

Comets are considered “dirty snowballs” because their cores usually consist of dust and rocks frozen together. As a comet approaches the Sun, its surroundings become warmer and the ice sublimates—it goes from a solid state directly to a gaseous state. This is how a comet’s coma and tail are formed. The area of ​​space in which C/2014 UN271 is located is -211 °C – the temperature at which carbon monoxide ice actually sublimates. Researchers believe that Comet Bernardinelli-Bernstein may have been active since 2008*.

Since comets from the Oort Cloud did not form at the outer edge of the Solar System, but were in the middle of what was happening when planets were forming, they are considered valuable celestial bodies that can provide a glimpse into this time. Research indicates that when the planets and moons formed, comets poured into the outer edge of the solar system and acted like a “freezer” to preserve the elements from that time.

Giant comet Bernardinelli-Bernstein will be closely observed in the near future with new knowledge of its size. For another nine years, the comet will approach Earth before returning to the Oort cloud. (Tania Banner) * fr.de view from IPPEN.MEDIA.

Sign up for our free FR Astronomy newsletter* and get important news from astronomy* and space travel* straight to your inbox.