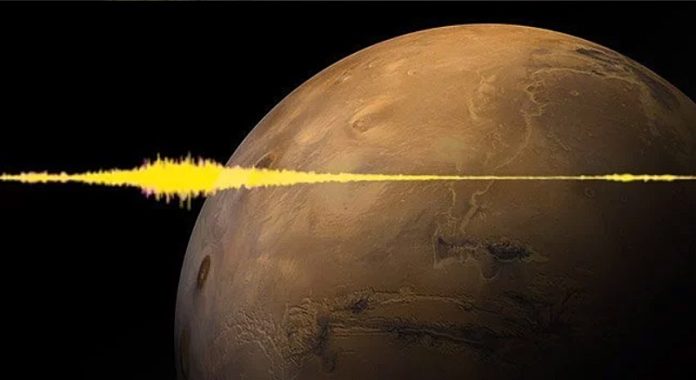 Deep tremors: Mars could be volcanically active today – at least below its surface. An indication of this is provided by the deep tremors recorded by the seismometer on NASA’s InSight Mars probe. Depending on their characteristics, the tremors could be due to magma flows flowing under the young volcanic region of Cerberus Fossae. So Mars’ upper mantle is still mobile.

How much heat is left inside the red planet? Is there still volcanic activity under its surface today? Huge volcanic mountains such as Olympus Mons, lava caves and calderas of supervolcanoes are evidence that Mars was volcanically active. But whether Mars’ mantle is still hot and dynamic enough to show magma flows is debatable.

But now, the Mars Insight probe has detected seismic tremors that have shed new light on the dynamics of Mars’ mantle. Since the seismometer was deployed on Mars in February 2019, the probe has already recorded more than 465 clearly identifiable earthquakes. Most of them are high-frequency and shallow, so they are considered tremors caused by changes in the temperature of the Martian crust.

But there are 41 other earthquakes of lower frequency and have different waveforms than these shallow tremors. However, their seismic signatures were too unclear to determine their origin. That’s why Weijia Sun of the Chinese Academy of Sciences and Hrvoje Tkalčić of the Australian National University in Canberra have once again analyzed raw data from the Mars InSight seismometer.

See also  Your character will not have a voice

Using two analytical methods, the researchers searched for other low-frequency swamps—and struck gold. They identified 47 previously undetected tremors that were also significantly low-frequency and whose characteristics were most recognizable. “From the similarity of their waveforms, we conclude that these are frequent earthquakes from the same original region,” the scientists report.

They have located the new epicenter of the earthquake in Cerberus Fossae – a region of Mars that has recently become the focus of attention. Planetary researchers have discovered volcanic material there that may only have been ejected during the past 50,000 years. Anyway, this volcanic region could be younger than about 20 million years old.

The origin of the mantle of Mars

Also interesting: in contrast to the previously known high-frequency tremors, the newly identified earthquakes occurred not only in the first half of the night, but also in the middle of the day. The seismic waves also indicate that the origin of the newly identified tremors is much deeper – in the upper mantle of Mars. “The great depth and recurring nature of these earthquakes makes it unlikely that they are tectonic activity at crustal faults,” the team explains.

Alternatively, these earthquakes may be caused by magma flows in Mars’ mantle. “We hypothesize that the movement of molten rock in the Martian mantle was the cause of these 47 newly discovered tremors under the Cerberus Fossae region,” says Tkalčić. It is possible that magma is still flowing upward from greater depths under the still young volcanic region.

Does Mars have convection?

But this means: The mantle of the Red Planet could still be in motion today, and therefore it is much hotter and more dynamic than previously thought. If confirmed, this will be an important discovery not only about the origin of swamps. “The question of whether the Martian mantle is still active is critical to our understanding of the history of Mars,” says Tkalčić.

An insight into Mars’ mantle can clarify, among other things, whether or not the Red Planet still has a gestational mantle similar to that found on Earth. This will affect the heat transfer in the interior of Mars and the fluidity and dynamics of the Martian core. This, in turn, is critical to the question of why and how Mars lost its once global magnetic field.

“If there is this convection – and it seems to depend on our findings – there must be another mechanism by which the red planet’s magnetic field is lost,” explains Tkalčić. The researchers hope that more data from Mars InSight will help clarify these questions in the future. (Nature Communications, 2022; doi: 0.1038/s41467-022-29329-x)