Home Tech Mars: a surprising discovery of the red planet under the “Grand Canyon” 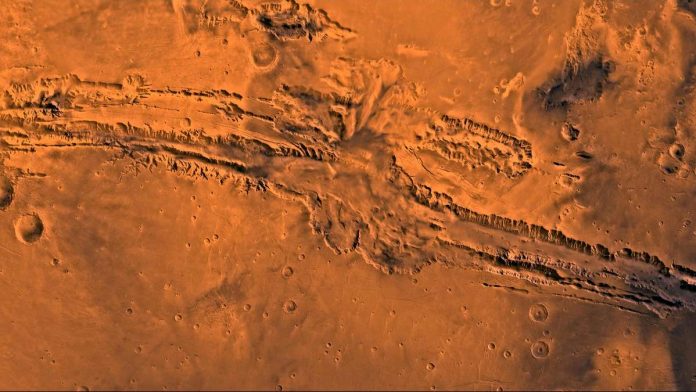 Under Valles Marineris, the “Grand Canyon of Mars”, researchers discovered a large amount of water with the help of the European-Russian “Trace Gas Orbiter”.

Frankfurt – There is water on Mars, especially at the poles, and this is already known. But now researchers have made a groundbreaking new discovery on the Red Planet: massive amounts of water in an area called Valles Marineris (Mariner Valleys). It is a huge fault system that extends 4,000 km in length and 700 km in width and has valleys up to 7,000 m deep. The system is also called the “Grand Canyon” of Mars and is the focus of the new discovery.

In order to find water in the Grand Canyon on Mars, researchers evaluated data from the European-Russian Gas Orbiter Trace (TGO), which has been orbiting the Red Planet since October 2016. The probe contains the FREND (external neutron detector) instrument. Precision Resolution) on board, which can look up to one meter below the surface of Mars and detect hydrogen – a component of water.

Igor Mitrofanov, of the Space Research Institute of the Russian Academy of Sciences in Moscow is the lead author of a new study describing the discovery of water on Mars and Published in the specialized magazine Icarus Will be.

With the help of the FREND instrument, the researchers were able to detect an area “with an unusually high hydrogen content” in the Valles Marineris Valley system, Mitrofanov reported in a communication from the European Space Organization ESA.

“Assuming that the hydrogen we see is bound to water molecules, forty percent of the near-surface material in this region appears to be water,” the researcher sums up the discovery on Mars. The area where scientists suspect the water is said to be about the size of the Netherlands and extends into deep valleys in an area called Candor Chaus.

In order to detect water on Mars, Mitrofanov and other scientists evaluated observations from May 2018 to February 2021. The FREND instrument did not detect light, but neutrons. “Neutrons are generated when high-energy particles known as galactic cosmic rays strike Mars,” explains co-author Alexei Malakhov. Dry soil emits more neutrons than wet soil, so it was possible to infer how much water was in the soil. Because FREND enables better spatial resolution than other instruments, it is now possible to detect water that has not been observed before.

Water on Mars: Researchers evaluate data from a European rover around Mars

“We discovered that a central part of Valles Marineris is filled with water — much more water than we expected,” Malakhov confirms, comparing the find to land: “This is similar to permafrost regions on Earth where water ice is the result of persistent low temperatures beneath the dry soil.” Water can exist as ice or as water chemically bound to other minerals in the soil. “In general, we think that this water is more present in the form of ice,” Malakhov says, summarizing the research team’s findings.

In the region of Mars where researchers have found water, water ice usually evaporates due to temperature and pressure conditions; The same is true of chemically bound water: only with the right combination of pressure, temperature, and water do minerals on Mars lose water. This indicates that in Valles Marineris there must be a special mix of conditions in order to conserve water – or to replenish it, according to an Esa announcement.

Håkan Svedhem, co-author of the study and an Esa employee, is already looking to the future: “This finding is a great first step, but we need more observations to know for sure what the water looks like.” , the capabilities of the “Trace Gas Orbiter” instrumentation, which shows “a large, not very deep and easily accessible water reservoir in this region of Mars.”

The “Trace Gas Orbiter”, which has been orbiting Mars since 2016, is the first part of the European-Russian ExoMars program. The second part is the launch to the Red Planet in 2022: the European Rosalind Franklin rover sits on the Russian “Kazachok” platform and is supposed to find out if there is life on Mars. He’s not alone in this task: NASA’s Curiosity and Perseverance rover takes over this task, too. The new “Perseverance” Mars probe has recently caused quite a stir: first it solved “one of the greatest mysteries” on Mars, then answered a question about Mars that researchers have so far been desperate for. (tab)