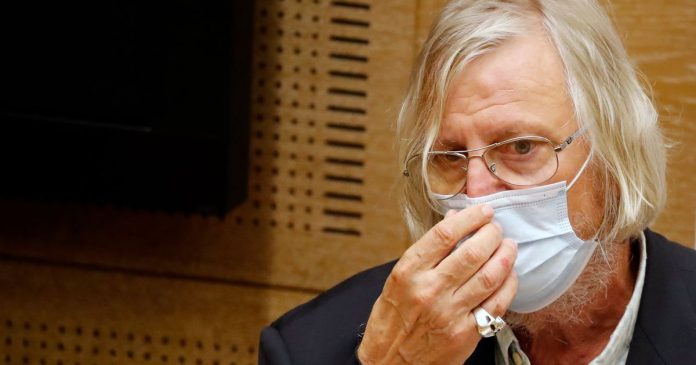 Via The Associated Press

Didier Raoult receives a ‘reprimand’ from the Medical Syndicate (Didier Raoult during his Senate hearing on September 15, 2020 by AP Photo/Francois Mori)

Health – Did Professor Didier Raoult violate the medical ethics code by promoting hydroxychloroquine against Covid-19? Yes, the Disciplinary Chamber of the Physicians’ Union estimated on Friday 3 December in Bordeaux, before deciding to direct his “reprimand” to him.

The authority published this punishment, which is the second in importance after the simple warning, without accompanying it with the motives for this decision against the infectious disease specialist in Marseille 69 years ago.

Since the end of 2020, the 69-year-old infectious disease specialist in Marseille has been the target of two complaints filed by the Medical Association of Bouches-du-Rhone and the National Council of the Medical Syndicate (Cnom). The rapporteur of the disciplinary chamber said during a meeting on November 5 in Bordeaux, that he is accused of promoting hydroxychloroquine to treat Covid-19, “without confirmed scientific data”, which is like “impostor”.

It added that he was also accused of taking “reckless risks” by treating patients with this “unproven” treatment.

The complaints were made on the basis of several reports initially made by the French-speaking Society of Infectious Pathology (Spilf), and also accuses Professor Raoult of violating Article 56 of the Code of Ethics, through his communication, by “absenting from his duty of fraternity” towards physicians others.

These complaints were examined by the Disciplinary Chamber of the New Doctors’ Union of Aquitaine, made up of 8 doctors and headed by an administrative judge.

Present at the beginning of November before the chamber out of “respect for this institution”, Didier Raoult, retired since August 31 as a university professor and hospital practitioner, felt “unconcerned” about possible “sanctions”.

Possible violations of the regulation of clinical trials

“It is the doctors who complain about us, not the patients,” he had called the plaintiffs’ lawyers, stressing that he had received “more than 600,000 patients” inside the IHU during the health crisis, “without any complaints” from them.

He has advocated the “success” of his treatment combining hydroxychloroquine and azithromycin to treat Covid-19 patients, although there has been no proven effect to date. His lawyer, May Fabrice de Vizio, had asked to dismiss the measure, and asked the disciplinary body to “declare the complaints inadmissible”.

In addition to this procedure, Professor Raoult, together with the IHU which he established in 2011, has also been targeted by several other surveys on the conditions under which the Institute conducted its studies on Covid-19.

These investigations were opened this year by Aix-Marseille University, another founding member of the IHU, by Hospitals of Marseille (AP-HM) and the National Medicines Agency (ANSM), following an article by L’Express on “possible violations of the regulation of clinical trials” .

Investigation of a ‘wild trial against tuberculosis’

Finally, on November 4, it was Health Minister Olivier Veran and his colleague from higher education and research, Frédéric Vidal, who asked the Inspectorate General for Social Affairs and the General Inspectorate for Education, Sports and Research to carry out an “important oversight” at the IHU.

Professor Raoult should only remain at the helm of this institute for a few months, which began the process of selecting a new director a week ago, without giving a specific date for the position.

See also on The HuffPost: Florian Philippot and Antioxidants in Support of Didier Raoult in Paris

AIDS: Dozens of countries have met or exceeded UN targets