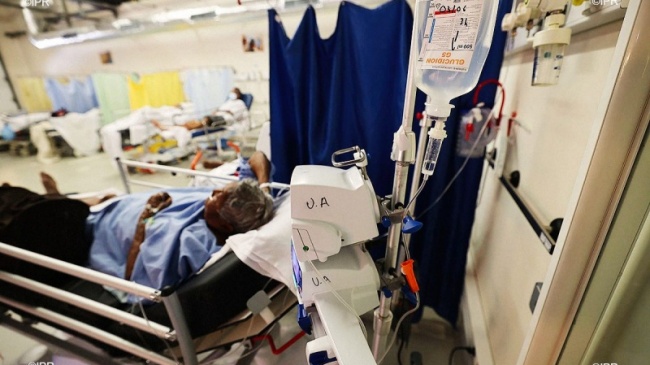 The dengue virus hits La Réunion in full force this year. At this point, more than 15,600 cases have been recorded since the beginning of 2021, which is much more than the previous two years for the same period, while the epidemic has been going on for more than three years now. With more than 70% of cases concentrated in the west of the island, West Runion Hospital Center (CHOR) is expensive. In emergency situations, the number of beds was no longer sufficient and a new room was rented to house patients. In this month of June, caregivers finally see the start of the plateau. (rb photos / www.ipreunion.com)

Outside of CHOR, patients are waiting their turn. The emergency department has been running at full speed for about two months. A massive influx directly linked to dengue … but also to Covid-19. Two pidmies that are currently experiencing La Runion with record rates.

This month of June, waiting lists in front of the emergency room are starting to thaw, but the wait is still long for those patients who must first pass by the guidance nurse, before being redirected to medical, resuscitation or intensive care services.

But places lack medicine, prompting CHOR to open a room normally designated for the “White Plan” (a specific health emergency plan, which is not currently in La Runion). Usually an empty room, which quickly filled up over the past two months.

“During peak traffic periods, we had as many people outside as inside. We usually had a capacity of 30-35 people lying in the emergency department, and we reached daily numbers of 60-65 patients each day. We even went upstairs.” 96 patients present at the same time: they were everywhere, in the corridors,” recalls Dr. Katia Mugen Al-Damore, MD, head of the emergency department. “Yes we had to push the walls…but we have no choice.”

While the department enrolled an average of 5-10 dengue patients in March, the average increased to 15-20 patients in April, then more than 30 patients each day in May. As many as 39 sick peaks were recorded between May 23-24.

In the small “white” unit, the beds are placed side by side, separated by colored curtains. Some are there because they have multiple pains as they are varied, an old lady because she fell and broke her arm, a young woman because she felt unwell during pregnancy. Next to them are patients with dengue fever.

Some have already been diagnosed and come to the emergency room because they are experiencing complications. Others have symptoms and are waiting for the results of analyzes carried out by their caregivers. “So madam, I announce to you that it is not dengue fever” refers specifically to the nurse of a severely tired and dizzy patient.

This is not the case for Antoine, 80, who has confirmed the virus. “I felt so bad, so tired. I was under the impression that I was like a vegetable. I have pain in my joints. But I know it won’t go away right away,” he told us with difficulty, almost whistling between each word. Cindy, the caregiver, arrives specifically to give paracamol that is supposed to soothe the pain. But only the rest will really save.

See also  Free time: Plants: This is how the primrose cup blooms for weeks

Like him, other patients flock to CHOR because they have worrisome symptoms. “We’re seeing more severe forms this year, because we have more cases. But we shouldn’t confuse warning signs with dangerous forms,” ​​warns Christoph Vanek, MD, CHOR. “The warning signs arrive around day 4 or 5 with extreme tiredness, vomiting, and food intolerance…require hospitalization as they may lead to complications later on.” Hence serious forms.

This year, the Regional Health Agency (ARS) meticulously announced the first cases of “dengue shock,” a highly dangerous form of the virus, which has so far not been observed in La Réunion. It is a complication that can be fatal, which causes hypotension, malaise, and sometimes attacks of tachycardia. In this case, the body can no longer function. “Is this really the first time we’ve seen it here, I don’t think so, but we’re seeing more of it this year,” notes Dr. Christoph Vanczyk.

“We have 5% more severe forms than in previous years. We have admitted many patients to the hospital with very disturbed lab tests, bleeding, heart complications, eyes… We haven’t seen much in previous years” notes Dr. Katya. Mojen Damour. According to the ARS, 21% of patients hospitalized with dengue have the acute form.

Now caregivers can see the beginning of the plateau. “The numbers say so too. Since the beginning of the activity we’ve recorded fewer passes, anyway hopefully,” breathes Dr. Katja Mogen-Damore. On Tuesday, the health authorities announced 1,494 confirmed cases of dengue fever from May 17 to 23, compared to 2,074 cases in the previous week.

Read also – Dengue fever: an epidemic that has lasted for three years already