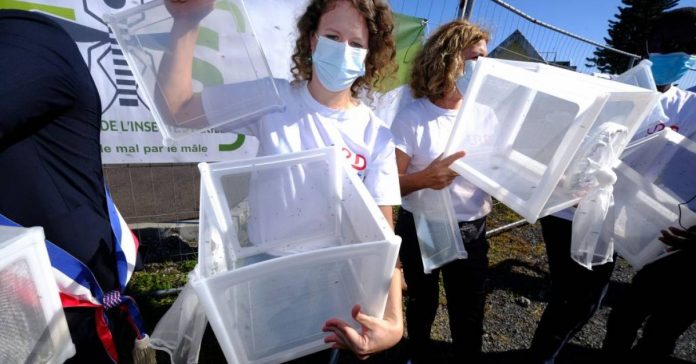 Mary. As part of the fight against the dengue epidemic in Reunion, the Institute for Research and Development conducted its first release of sterile male mosquitoes yesterday in Saint Mary’s Heights.

It was a few minutes past 10 a.m., yesterday morning, in Saint Mary’s Heights, when researchers from the Research Institute for Development (IRD) released 151,000 sterile male Aedes albopictus into the wild. the aim? To demonstrate the effectiveness of the Sterile Insect Technology (SIT) in reducing tiger mosquito populations on a district scale.
As a reminder, in June 2019, IRD teams carried out the first release of 3,000 sterile male mosquitoes in the city, with the goal of testing the species’ survival in the natural environment. Two years later, the IRD is taking the next and most important step. “The goal is to release five to ten times more sterile male mosquitoes than those found in nature, Luis Clément Guagna, IRD Research Scientist and Head of the TIS Project, explains. Thus we will be able to reduce the number of female mosquitoes, which are the only ones that bite and transmit disease. You have to know that we will not be able to eliminate mosquitoes, but we know that if we can reduce the population, we will be able to prevent diseases.”
In the experimental area in Duparc, which spans an area of ​​20 hectares, it will be a matter of releasing approximately 150,000 male mosquitoes every week, that is between 10 and 12 months. Concretely, this corresponds to the release of 10 sterile males to a wild male, Details Cecil Pringis, IRD Study Engineer and Field Project Manager. Regarding release points, they were determined according to the average dispersal of mosquitoes. Since we know that the average dispersal distance is less than 100 meters, we have identified three firing points per hectare.” A total of 60 points were identified, with 2,000 to 4,000 sterile Aedes albopictus released per drop.
“Even if our number is not so great, the whole world is watching us, Executive Director Didier Fontenelle, IRD Research Director. We just changed the model. So far to combat epidemics and outbreaks of dengue or chikungunya, we have used the least bad methods possible. We found ourselves a little helpless as he kept catching dengue in Reunion. We have decided to introduce something new that will gradually allow us to overcome what is not enough. ”
“IST is a complementary and targeted technology, we use the mosquito to fight itself, against individuals of its own kind, Lewis Clement Jogna resumes. It is an environmentally friendly technology and the sterile mosquito will not transmit sterility to other insects in the wild. It’s the Bai mosquito that we’ve produced, sterilized and released into the wild.”
About Professor Xavier Deparis, Director of Health Surveillance and Security at the Regional Health Agency, “Chemical control has reached its limits because the concern we have in the ecosystem means that the biocides we used twenty years ago are now banned from use. Now, we only have a few biocides left. The toxic substances we use at Reunion are in a reasonable and sensible way.” With TIS, the interesting thing is that it has no impact on the ecosystem and we avoid creating resistance from mosquitoes.”

What is a classic TIS?

Since 2009, IRD and its partners have carried out a research project on SIT on Reunion Island. This technique consists of sterilizing male mosquitoes with radiation and releasing them in large quantities into the wild. Females, fertilized by these males, lay eggs that will never hatch. This preventative and environmentally friendly method is used, in addition to “traditional” vector control measures, to reduce mosquito populations and the risk of transmission of dengue fever or chikungunya.