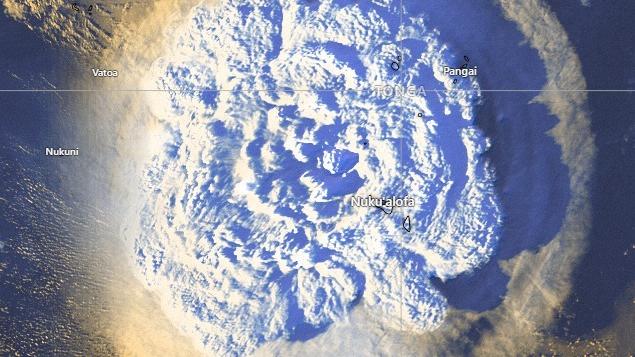 Volcanic eruption in the Pacific Ocean: The authorities have warned of flooding, and waves of two meters in height were reported, also in the USA and South America. Now there is an alarm in another country.

According to the US Tsunami Warning Center, an undersea volcano eruption in the South Pacific caused a tsunami that was felt as far away as America and Japan. The authority said, on Saturday, that the tsunami waves were measured at different heights. A tsunami warning was issued across Tonga on Saturday. The West Coast of the United States has also been warned: “Stay away from beaches, ports, and marinas,” the US Meteorological Service recommended to residents of coastal areas in California to Alaska. According to media reports, two people in California were washed up at sea while fishing when the wave receded.

Meanwhile, authorities in Japan also issued a tsunami warning for the island’s Pacific coast. As Japanese media reported early Sunday morning (local time), tsunami waves about one meter high were recorded on the coast of northeastern Iwate Prefecture and in the southwest of Amami. There were initially no reports of damage or injuries. Residents have been urged to exercise extreme caution until the tsunami warning is lifted.

230,000 people were evacuated in eight prefectures in Japan on Sunday as tsunami waves more than a meter high hit coastal areas. This was reported by Japanese public broadcaster NHK. A tsunami warning has also been issued for areas affected by the deadly 2011 tsunami. Ten boats capsized in Kochi Prefecture on the island of Shikoku in the south. Japan Airlines has canceled 27 flights at airports across the country.

Local media in Tonga reported that tsunamis had flooded the properties. It rained ashes of ashes and telephone connections were disrupted. According to media reports, the sixth king of Tonga Tubu. He was brought to safety from the royal palace in the capital, Nuku’alofa.

Gorgeous satellite images show the massive eruption in the ocean and its consequences for people. Watch the video above or here.

It was not initially clear how much damage had been done to the island. Meteorological Authority Australia Talk about a tsunami height of 1.2 meters. Experts on Twitter reported two-meter waves in Nuku’alofa, the capital of Tonga.

The trigger for the tidal waves is the violent eruption of the underwater volcano Hongga Tonga Hung Hapai. The volcano had already spewed ash, steam and gas up to 20 kilometers into the air on Friday. It also rained ash on Nuku’alofa. Another volcano eruption is said to have occurred on Saturday morning, 20 minutes after the tsunami that inundated homes, streets and cars in Tonga. Sirens were sounded in coastal cities.

“It was huge, the ground was shaking, our house was shaking,” a resident of the capital told the Stuff news portal. “It came in waves, my younger brother thought there were bombs exploding nearby.” Locals called on people to “pray for us.”

Authorities in other Pacific countries have also issued tsunami warnings, including Fiji, Samoa and New Zealand. Fiji said residents should avoid the coast “due to strong currents and dangerous waves”. A TV reporter from Fiji posted a video on Twitter showing smaller tsunamis hitting the ground and people fleeing to safety in their cars. For Australia, there have been warnings for some islands. authorities in New Zealand They said they would monitor the situation. Peru issued tsunami warnings on Sunday evening. It is said that there were two killers.

Tonga residents were urged to leave the beaches and go to higher ground. Beach residents pulled onto their rooftops and filmed big waves hitting their homes.

A warning was initially issued for American Samoa, but was subsequently lifted. Based on the available data, it can be assumed that the tsunami risk has passed, but there can still be fluctuations in sea level.

Hunga Tonga-Hunga Ha’apai has been on and off since December. The volcano is located about 30 kilometers southeast of the island of Fonuafo’ou in Tonga (also known as Falcon Island).

The Secretary-General of the United Nations expresses concern