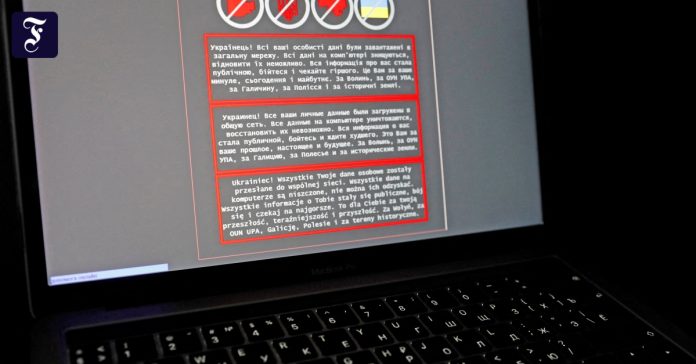 noh he Internet attack Kiev sees “initial indications” of possible involvement of Russian intelligence services on dozens of Ukrainian government websites. Ukrainian Foreign Ministry spokesman Oleg Nikolenko said on Twitter Friday evening that the Ukrainian intelligence service “has received initial indications that hacker groups linked to Russian intelligence” may be behind the massive cyber attack. Meanwhile, the US and Britain warned that Moscow might create a pretext to invade Ukraine. The Kremlin denied the allegations, calling them “baseless”.

In light of the massive deployment of Russian forces on the border with Ukraine, the West fears that Russia is currently preparing to invade the neighboring country after the 2014 annexation of Crimea. The massive cyber attack on government websites in Kiev on Friday night raised more concerns.

Ukrainian Secret Service SBU It was reported that a total of 70 government websites were attacked. In 10 cases, there was “manipulation” but the content was not changed and personal data was not disclosed. The Foreign Ministry website temporarily read “Fear and expect the worst” in Ukrainian, Russian and Polish.

Also the external representative of the European Union Josep Borrell They considered it “reasonable” that Russia was behind the cyber attack. Austrian Foreign Minister Alexander Schallenberg expressed fears that it was a harbinger of military activities.

Meanwhile, the United States said it understood that Russia was creating a pretext to invade Ukraine. “We have information indicating that Russia has already deployed a group of agents to carry out a false flag operation in eastern Ukraine,” a government spokeswoman said. Jin Psaki.

Moscow’s goal is to accuse Ukraine of “preparing an imminent attack on Russian forces in eastern Ukraine”. The Russian forces plan to start these activities a few weeks before the military invasion, which could begin “between mid-January and mid-February”. The statements from Washington were met with outrage in Moscow and were rejected by both the Russian embassy in Washington and Kremlin spokesman Dmitry Peskov.

Roth: It is possible to have a discussion about the provision of protective equipment

British Foreign Secretary Liz Truss on Saturday accused Russia of launching a disinformation campaign targeting Ukraine. The minister said this should destabilize the country and justify the invasion. “Russia must stop its aggression, stop escalation and open up to serious talks,” she wrote on Twitter on Saturday.

Meanwhile, the desire to support Ukraine with certain military goods has grown in the Traffic Light Alliance. “We agreed in the coalition agreement not to deliver weapons to crisis areas,” the head of the Bundestag’s Foreign Affairs Committee said. “The principle applies.” Michael Roth (SPD), and RND. However, the debate over “protective devices such as helmets and flak jackets” is “conceivable”.

Intense crisis diplomacy was launched this week to defuse the situation on the Ukrainian border: first, there were bilateral talks between the United States and Russia in Geneva, then the NATO-Russia Council met for the first time in two years, and there were negotiations within the Ukrainian border. The OSCE Framework for Action in Vienna.

The United States is exposed to a wave of criminals