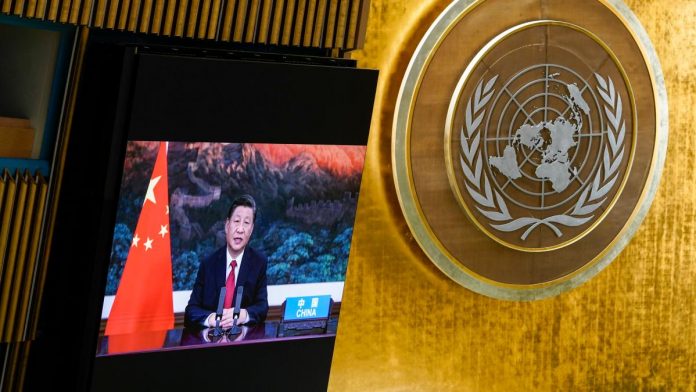 Europe and the United States are arguing – China seizes its chance

The failed submarine deal and the chaotic withdrawal from Afghanistan have left a fatal impression: the United States lacks credibility. Beijing’s ruler, Xi Jinping, makes clever use of this — with an unforgettable speech.

IIn the crisis between Europe and the United States, the winner is the superpower whose growing influence the West wants to curb: China. President Xi Jinping used his appearance at the 76th session of the United Nations General Assembly in New York to recommend to the international community as a more reliable partner than his opponent, US President Joe Biden.

Xi Jinping called for “dialogue and inclusion” in a video message broadcast late Tuesday night, European time. China’s governor said that “disagreements and problems between countries”, which are difficult to avoid, should be dealt with “on the basis of mutual respect”. Choose a nice mountain scenery as your video background.

The Communist Party chief has repeatedly stressed that China will abide by all agreements made by the international community. Whether in environmental protection, development aid, or in the fight against the epidemic – yes, even it is supposed to be compatible with democracy and human rights.

In stark contrast to these statements is the transatlantic rift over the new security alliance with Australia and Great Britain in the Indo-Pacific, which the US president surprisingly announced last week. Biden had deliberately kept the project a secret from the European Union and Germany, as well as allowing France’s billion-dollar deal to deliver submarines to explode. Many see it as an unfair game and even a broken word.

To Beijing’s delight, the higher meeting in New York, which runs through Monday, has so far not helped resolve this dispute. exactly the contrary. In his speech, delivered by Biden earlier that day, the US president swore the world to a new cohesion, to end wars in a new “age of diplomacy.”

At the same time, he ignored Brussels, Paris and Berlin again on the international stage by not explicitly mentioning them as partners in the Indo-Pacific, but Australia, Japan and India. Meanwhile, the European Union postponed important trade talks with the United States in protest. Commission President Ursula von der Leyen called the US approach “unacceptable”, and German Foreign Minister Heiko Maas called it “disturbing” and “realistic”.

For all the insults, it has been almost forgotten that the West’s involvement in the Indo-Pacific is about countering China’s increasingly expansionist behaviour. So the regime that Xi Jinping represents is unparalleled in his country. But he showed nothing and called for “real pluralism”. This was also a criticism of US President Biden, who called for international cooperation, but recognized that decisions must first be based on his interests.

Jinping’s words are unlikely to impress those countries that already have a clear view of human rights abuses and the growing global claim to power for his regime. In his appearance, he cleverly uses the murderous impression that the West has left recently. That you cannot necessarily trust his promises, and that he will let people down. Like the chaotic withdrawal in Afghanistan. Submarine conflict does not increase the impression of loyalty to the alliance.

Countries looking for a partner to invest and develop aid can fulfill China’s promises. China has been investing specifically in poor countries for years. However, the concept of the “New Silk Road” serves the sole purpose of gaining geostrategic influence. Investing in population, democracy, or even lofty goals like equal opportunity are not part of the concept.

It looked very different before the United Nations. Jinping stressed China’s commitment to “weak countries”, and spoke of “fair development cooperation” and “relations on an equal footing.” That sounds good. Anyway, better than abandoned local employees or a billion dollar deal for submarines.

In the “Kick-off Politics” podcast, we’ll give you the most basic information on an important political topic of the day in conversation with WELT experts Monday through Friday. From 6 am, in just 10 minutes.