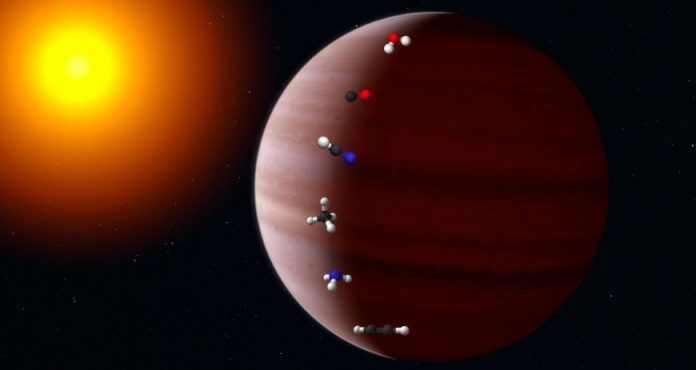 The gas giant depicted directly around the young star
Editorial Board
/ idw / press release from the University of Jena
astronews.com
20. April 2021

With the help of
Very large telescope ESO has succeeded in directly photographing a small exoplanet. The planet orbits the sun-like star YSES 2, which is about 360 light-years away and is located in the southern sky in the constellation Fly. The new discovery still poses some mysteries to the team.

Since the first exoplanets were discovered 30 years ago, the number of newly discovered planets in distant stars has been steadily increasing. More than 4000 copies are now known. However, the vast majority of them were only detected through indirect monitoring methods. However, direct observation of exoplanets near their central stars has been less common thus far.

“The use of only modern adaptive optics on a large eight-meter class telescope in addition to special high-contrast observation methods allow for direct imaging of such objects under the star in the immediate vicinity of their brightest parent stars,” explains Marcus Mugrauer. From the Institute for Astrophysics at Friedrich Schiller University in Jena who participated in the observations. “And that’s exactly what is happening with Sphere Very large telescope
ESO in Chile is possible. This tool was specially developed for live imaging and exoplanet characterization. “

The newly discovered exoplanet YSES 2b is about 10,000 times less bright than its central star. This discovery is made possible by the very young age of the planet. “During the first millions of years of their existence, planets essentially radiated the gravitational energy emitted during their formation,” says Mugrauer. According to the temperature of the planets at this early stage of evolution, this radiation lies in the near-infrared spectral range. In this case, observations were made at approximately 1.6 and 2.2 μm.

YSES 2b still raises questions about its development process. In today’s astrophysics, two different theories of planet formation in large disks of gas and dust around young stars are discussed: On the one hand, there is a so-called basic growth scenario, in which kilometer-sized planets are initially formed from dust and ice particles through processes of agglomeration and accumulation, which Through subsequent collisions, it grows into more and more massive objects, which can eventually attract the surrounding gas, creating gaseous planets.

On the other hand, there is a possibility that the gravitational instability of the disk of gas and dust around the young star itself could lead to planet formation. Initially, masses of gas and dust are compressed into the disks, which then contract to form planets due to their gravity. However, the existence of YSES 2b cannot unambiguously explain either of the two theories.

On the other hand, the mass of the planet is too low to be created by the instability of the gravitational disk at a distance of more than 100 AU from its parent star. On the other hand, it is so far from its parent star that its formation cannot be explained by a basic growth scenario. Therefore, follow-up observations are essential in order to investigate exactly how the formation of the newly discovered exoplanet occurred.

On the one hand, the composition of its atmosphere must be analyzed by means of spectroscopy, and on the other hand, its orbit around the original star must be determined in detail. Additionally, the authors concluded that it remains to be ascertained whether the star has other planets orbiting it in close proximity to each other. In addition, new spotting processes with SPHERE have already started Very large telescope Planned by ESO.

“Even if it is not currently clear how exactly YSES 2b could happen, we are confident that the new observations will help solve this mystery,” said Alexander Boone, head of the study and doctoral student at the University of Leiden, in the Netherlands. . “In this way we hope to gain new insights into the formation of gas giants, which could also be relevant to our solar system.”

YSES stands for “Young Suns Exoplanet Survey” and is the title of an observation project at ESO’s Paranal Observatory in Chile. At YSES, young sun-like stars in the Scorpius-Centaurus association are sought after for planets and their properties are distinguished. YSES 2, the parent star of the new planet, is roughly 14 million years old “young” and a member of the Inferior Centaurus-Crux Star Association.

The newly discovered planet YSES 2b is about 115 times farther from its parent star than Earth and from the sun. Its surface temperature ranges between 900 and 1100 degrees Celsius, and it has a mass five to eight times the mass of Jupiter in our solar system. Thus YSES 2b belongs to the class of so-called “broad gas giants”, of which only a few have been discovered in young stars so far. YSES 2b is also one of the largest live-photographed exoplanets ever. In particular, the exoplanet contains only 0.5 percent of the mass of its original star, so the lowest mass fraction of an exoplanet has been directly imaged in orbit around a similar star so far.

The team writes about their observations in a specialized article in the journal Astronomy and Astrophysics
Has been published.

Battlefield 2042: Bots are essential, but they are cannon fodder