Home World Faroe Islands: Poachers kill dolphins in 1482 – ‘It took them all... 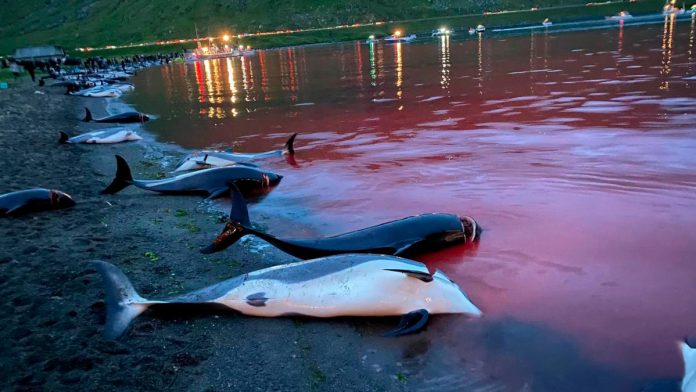 Every year there is a “Grindadrap” in the Faroe Islands – a whaling boat trip. But this time it hit the dolphins, and the scene was bloody like never before. Even some Hunters looked shocked.

DrPhotos of the bloody stalking were commented on mainly on social media: according to conservationists in the Faroe Islands, hundreds of dolphins were pushed into a fjord and killed.

According to Faroese radio station KVF, 1,482 animals were shot in Skálafjord on Sunday evening. Environmental Protection Organization sea ​​keeper Posted a long one video on facebookwhich showed men dragging animals from the red-blooded waters ashore. The organization spoke of the largest herd of marine mammals ever killed in a single “barbaric” operation in the Faroe Islands.

One user wrote that school of dolphins is a beautiful thing to admire and not drag to a bloody beach. “Fishing is pointless and, according to eyewitness reports, has caused great suffering to the animals. Here a limit has been crossed and a new dimension of fishing has been reached,” criticized the marine conservation organization OceanCare.

The island government defends the practice of fishing

As Danish Radio reported on Tuesday, the event has rekindled the local debate over traditional whaling. This hunt is known as the “Grindadrap” and has been practiced for centuries on the largely independent islands of the North Atlantic, which are part of the Danish kingdom.

However, the independent government of the Danish islands defended the practice of “well-regulated and fully regulated” fishing. “There is no doubt that whaling in the Faroe Islands is an exciting sight for people who are not familiar with hunting and slaughtering mammals,” a government spokesman told AFP news agency. Pilot whales, not dolphins, are usually hunted in Grinddrap.

It took a while to kill them all.

A local television journalist said it was unusual for so many dolphins to be killed in this hunt. It took a while to kill them all. It usually happens very quickly.”

The history of whaling in the Faroe Islands dates back to the Viking Age. The animals are transported to the bay from ships and boats, where they are slaughtered and then the meat is distributed to the participants.

Pilot whales are mainly hunted, but sometimes dolphins are also hunted. According to the Faroe Islands Census, a total of 576 pilot whales and 35 white-faced dolphins were killed in 2020. The number of dolphins killed, over 1,400, is already exceptionally high.