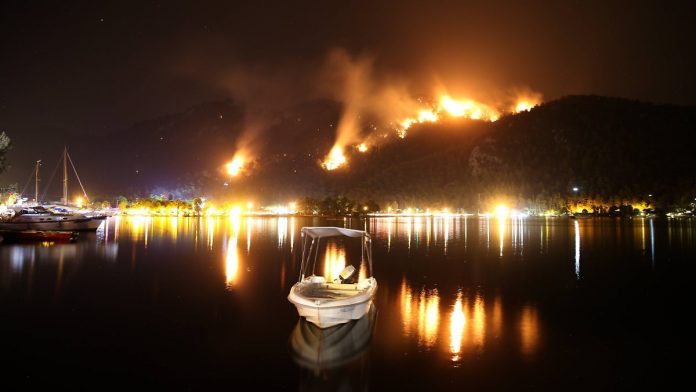 Greece and Turkey are on fire

Many people in Greece and Turkey are desperate for rain and cold – but neither is in sight. The fires in both countries continue unabated and uncontrollable. Greek Prime Minister Mitsotakis talks about an “unprecedented situation”.

Forest fires in Greece and Turkey continue unabated. Also on Friday night, fire rollers made their way through dry forests, shrubs and grasslands. Greek Prime Minister Kyriakos Mitsotakis swore the citizens of the most difficult days – among other things, burning near the capital, Athens. In Milas, western Turkey, fires have recently moved dangerously close to residential areas again, according to local authorities. The first neighborhoods were evacuated late Thursday evening.

“We have to fight dozens of forest fires. Three of them in Athens, the Peloponnese and Iboia are enormous,” Mitsotakis said Thursday evening in a speech broadcast on state television. And he warned of strong westerly winds on Friday, “an unprecedented situation because the past few days of heat and drought have turned the country into a powder keg.”

There were 54 active fires across the country Thursday evening. Therefore, people are not allowed to visit the forests until at least Monday. Work that can generate sparks or flames is also prohibited.

Fires in Turkey are not under control

In Turkey, too, troops continue to fight the fire. According to official information, 13 fires in 6 governorates were not controlled on Thursday evening. The holiday regions of Antalya, Marmaris and Bodrum were particularly affected, with emergency services unable to control the fires for several days.

Residents are desperate and hoping for rain – but the next few days will also be very hot. In Bodrum and Milas in Mugla Province, the temperature is expected to exceed 40 degrees Celsius on Friday. Foreign Minister Mevlüt Çavuşoğlu, whose constituency is in Antalya, expressed some hope on Thursday evening: the winds will decrease in Antalya on Friday and it is hoped that the fires will be brought under control there.

Thousands of people have already been forced to leave their homes and some have been placed in schools and sports grounds. The authorities continue to distribute lists of things needed: cutlery, dishes, pillows, blankets – the need is great.

The fire has already destroyed large areas. Eight people were killed, and it is estimated that at least 100,000 hectares of forests and fields fell victim to the fires. This is Turkey’s worst forest fire in more than 13 years.

A video clip shows that arson authorities are investigating