Home World COP26 outcome: These are the decisions of the Glasgow Climate Summit 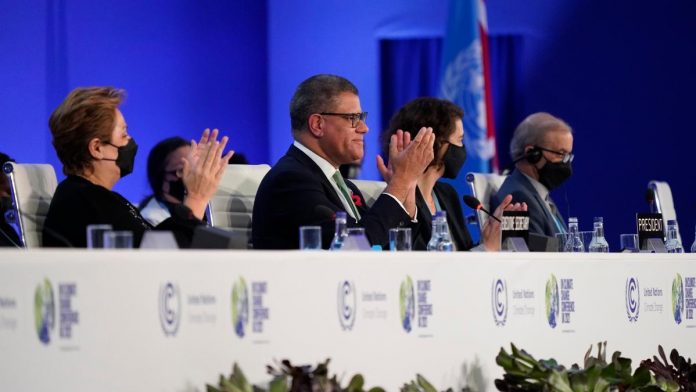 DrThe Glasgow Climate Charter, approved Saturday night after heated debate, calls not only for the phase-out of coal, but also for the elimination of “ineffective” oil, gas and coal subsidies. However, the wording weakened at the last moment under pressure from China and India.

German Environment Minister Svenja Schulz (SPD) continues to applaud the deal. “The fossil age is coming to an end, and energy transformation is becoming a model around the world,” she said. US Climate Commissioner John Kerry said what is supposed to be ideal should not stand in the way of the good in negotiations. “that’s good”.

On the other hand, the world’s most famous climate activist Greta Thunberg achieved a devastating equilibrium for the summit, also known as COP26. “COP26 is over. Here’s a quick summary: blah, blah, blah,” Al-Suwaidi tweeted. I took to the streets with tens of thousands of protesters in the middle of the road and then left.

The Secretary-General of the United Nations, Antonio Guterres, expressed his disappointment. “It is an important step, but it is not enough. It is time to go into emergency mode.”

The massive conference with 40,000 registered participants was supposed to end on Friday, but was extended into the late hours of Saturday due to hours of discussion.

The most important decisions at a glance:

– Invitation to bid farewell to coal

In the plenum, EU Commissioner Frans Timmermans unleashed his frustration on weak demand to exit coal under pressure from China and India. Instead of exiting (phasing out), pressure from countries heavily dependent on coal, China and India, is now only a gradual decline. This leaves an open question as to whether both countries will want to give up coal-based electricity entirely.

When several states complained bitterly about easing shortly before the final vote, British COP26 chief Alok Sharma fought back in tears. “I beg your pardon for the way it went,” said the host. “It is critical that we protect this package,” he added. Federal Environment Minister Schultz agreed, saying that with the decision on coal “a real thing that changes the world” has worked.

Commitment to a 1.5 degree goal

In the closing statement, the countries jointly committed to the goal of halting global warming by 1.5 degrees compared to the pre-industrial era. To that end, they must fine-tune their yet inappropriate climate protection plans for this decade by the end of 2022. That’s three years earlier than previously planned. The declaration also states that global emissions of climate-damaging greenhouse gases must fall by 45 percent this decade if the 1.5-degree limit is to be reached.

Poor countries have also promised more financial aid so that they can cope with the deadly consequences of the climate crisis in many places. Tens of millions of people already face frequent droughts, heat waves, storms and floods due to the acceleration of global warming. Specifically, this financial assistance will be doubled by 2025, from about 20 billion US dollars to 40 billion US dollars (about 35 billion euros).

For the first time, the long-standing demand is being addressed by poor countries to create a money pot to help in the event of damages and losses. This refers to destruction or forced resettlement after drought, storms or hurricanes. Countries are required to pay cash for it. However, no specific amounts have been given for this. Technical Support should only be provided after adverse events, but the full damage should not be paid.

Oxfam climate expert Jan Koelzig described it as “again as the poorer countries of the global south, particularly hard hit by the climate crisis, have been marginalized”. Development Minister Gerd Müller (CSU) assesses it in exactly the same way: “From the standpoint of developing countries, the results are totally inadequate, too fragmented and too slow,” he told the Funke media group.

– The complete rulebook of the Paris Agreement

Minister of State for the Environment Jochen Flasbarth hailed the decisions on the so-called rule book of the Paris Climate Agreement, where points have been open for years. The goal from the start has been to get rid of the “legal negotiating rubble”. “It all worked,” Flasbarth said. It has been organized, for example, that future five-year climate protection targets should be presented and reported according to uniform standards. There was also agreement on the question of how emissions reductions would be traded between countries in the future. According to Flasbarth, it has successfully eliminated the vulnerabilities.

Hours of heated debate delayed deliberations on Saturday. The politicians stood close to each other, gesticulating wildly and arguing. Finally, Timmermans fell into the entrapment of the delegates: “I beg you, accept this text.”

After Glasgow, Greenpeace chief Kaiser now sees the federal government’s planned traffic light alliance bound to take immediate action. “Putting out coal by 2030 is imperative. As of today, our tax money can no longer be used for coal, oil and gas.”

See also  Afghanistan live tape: talks between the federal government and the Taliban without result