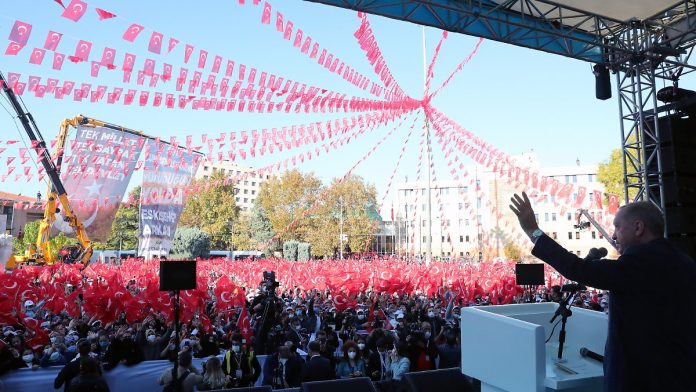 Officially, nothing has happened yet. The foreign ministries of the countries concerned know only from the media that Turkish President Erdogan has announced that ten Western ambassadors will be declared persona non grata. But German politicians are already demanding dire consequences in some cases.

Relations between Germany and Turkey face another stress test. The German government only “took note” of Turkish President Recep Tayyip Erdogan’s announcement that he would declare the ambassadors of Germany, the United States and eight other countries persona non grata. Representatives of German parties denounced Erdogan’s comments against them and demanded a tough response.

Erdogan announced in a speech on Saturday that he would declare the ambassadors of Germany, the United States and eight other countries persona non grata. The Turkish president said during a visit to Eskisehir that he had instructed the Foreign Ministry to do so. “I said, make sure you declare these ten ambassadors ‘persona non grata’ as soon as possible.” Such a move usually leads to the expulsion of diplomats. Erdogan did not give a deadline.

And it was said from the departments of the Foreign Ministry in Berlin: “We have taken note of the statements made by Turkish President Erdogan and the reports related to them, and we are currently conducting extensive consultations with the other nine countries concerned.” In addition to Germany and the United States, France, Canada, Finland, Denmark, the Netherlands, New Zealand, Norway and Sweden are also affected. The US State Department has requested clarification. “We are aware of the reports and are now seeking clarification from the Turkish Foreign Ministry,” a US State Department spokesman said.

The background to Erdogan’s statements is a statement by the ambassadors at the beginning of the week, in which they demanded the release of Turkish businessman and cultural promoter Osman Kavala. The 64-year-old has been held in Istanbul since 2017, although the European Court of Human Rights ordered his release in 2019. Turkey has so far ignored the ruling.

Kavala is accused of attempted coup in connection with the 2013 Gezi protests, which were critical of the government, as well as “political and military espionage” in connection with the attempted coup in 2016. Trials against him and with more than 50 other defendants are still pending in Istanbul and will continue at the end of November. His supporters see the allegations as politically motivated. Known in Turkey for his commitment to civil society, Kavala supports many projects with his organization Anadolu Kültür.

The Kavala crisis is likely to put severe strains on relations between NATO partner Turkey, the European Union and the United States of America. Indeed, Germany and Turkey came close again after the imprisonment of German citizens in 2017 led to a deep rift in bilateral relations. Just last week, Chancellor Angela Merkel stressed the importance of German-Turkish relations during her goodwill visit to Erdogan.

German politicians strongly condemned the Turkish approach on Saturday evening. Vice-President of the Bundestag, Claudia Roth, called for sanctions: “Erdogan’s unscrupulous actions against his critics are increasingly being denied,” the Green Party politician said. One has to confront Erdogan’s “internationally authoritarian path,” impose sanctions and halt arms exports to Turkey. FDP foreign politician Alexander Graf Lampsdorff wrote on Twitter that the prospect of expelling 10 ambassadors “would be unwise and undiplomatic and would weaken the cohesion of the coalition”. Erdogan cannot be interested in that.

CDU foreign policy expert Norbert Röttgen spoke of an “escalation in foreign policy” to the Sueddeutsche Zeitung newspaper. Erdogan is “leading his country even further in total distancing from Europe and the West.” Turkish opposition leader Kemal Kilicdaroglu also strongly criticized Erdogan’s comments. He wrote on Twitter that Erdogan did not want to represent national interests in this move, but rather to distract attention from the desolate economic situation.