Home Tech A speck of the moon? Plants grown in “Monderde” for the... 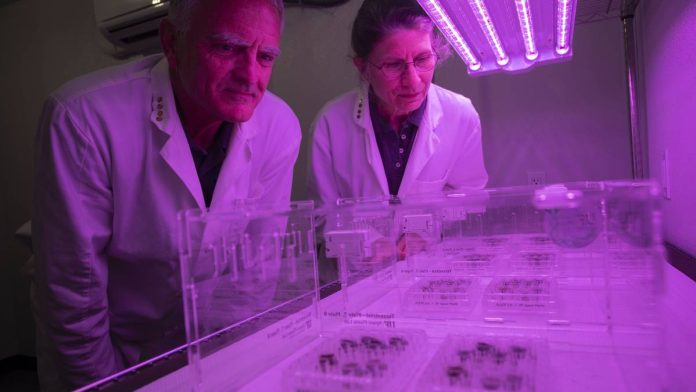 This study could go down in the history of space travel: for the first time, researchers have grown plants on a real lunar substrate that astronauts brought with them from an Earth companion. By doing so, they had systematically checked whether cultivation was possible on the orbs in the future. A team from the University of Florida in Gainesville reported in Communications Biology that plants could in principle grow on “moon soil,” but their growth stunted and the plants showed strong signs of stress.

For Urs Moll of the Max Planck Institute for Solar System Research in Göttingen, the study contains “undoubtedly interesting observations”. However, there are still many unanswered questions, says the lunar expert, who was not involved in the study.

Growing plants on the Moon will be of particular interest to NASA’s Artemis program: The US space agency wants to bring people back to the Moon again for the first time since the Apollo 17 mission in 1972 and establish a base there — if possible by the end of the decade.

In this project, plants can not only simplify the crew’s diet, but also produce oxygen, for example. “You want a closed cycle where everything is recycled,” explains Mole, referring, among other things, to carbon dioxide (CO₂) emitted by humans. “Plants will play an important role in this cycle.”

Spacewalking: Astronauts on field missions at the International Space Station

The two Russian engineers recently left the Russian contingent on the International Space Station to prepare for the deployment of a robotic arm.

The regolith was formed by the bombardment of the moon

“Artemis requires a better understanding of how plants grow in space,” explains co-author Rob Ferrell. For larger space missions in the future, we can use the Moon as a hub or launch pad. So it makes sense to use already existing soil to grow plants.”

Researchers are now investigating whether this is even possible on bulk materials on the Moon. This so-called regolith was formed by the intense bombardment of the Moon by meteorites. Over millions of years, the impacts shattered and crushed the rocks into a kind of sand that sometimes covers the surface of Earth’s satellite several meters high.

The crucial difference in terrestrial soils: “On Earth, soils are affected biologically,” Mole says, referring to plants, animals, and microorganisms. “This is missing on the moon.”

For the study, the team had only about 12 grams of lunar material that Apollo 11, 12 and 17 brought back to Earth from their landing sites. The material was sieved to a granule size of less than one millimeter, supplied with rock wool and an aqueous nutrient solution and placed in small containers at 0.9 grams each.

The researchers then placed the seeds of the cress plant (Arabidopsis thaliana) on the substrate. This plant, also widespread in Germany, is used in biology as a living model, in part because its entire genome has been sequenced.

First, all twelve seeds germinated. “We weren’t expecting that,” says lead author Anna Lisa Ball. “This showed us that lunar soil does not interrupt the hormones and signals that go into plant germination.” However, problems that did not occur with terrestrial substrate control plants similar to lunar material became apparent very quickly: the plants grew slowly, remained smaller, changed color and generally greatly varied.

Everyday life in space: an astronaut shows you how to wash hair

Illustration of astronauts on the International Space Station. Daily procedures are also done with all visitors, for example when washing your hair.

Differences between the pillars of the moon

Researchers interpret all this as a sign of stress. Further analysis revealed that the gene activity was similar to that of plants exposed to unfavorable factors such as salt, minerals or oxidative stress. “From this we conclude that the plants recognized the lunar soil conditions as stressful,” says Ball.

However, the team recorded notable differences between the different lunar substrates: The plants thrived the worst in the materials that Apollo 11 brought to Earth. Unlike the Apollo 12 and Apollo 17 sites, the lunar regolith at this landing site is older, and therefore has been exposed to cosmic rays and the solar wind for a longer time. These streams of charged particles constantly flow over the lunar substance and enrich it mainly with hydrogen and helium ions.

The study leaves many questions unanswered

In general, according to the research group, plants can certainly grow on “moon soil”, but this is basically not a good growing environment. “The data indicate that older regolith provides a lower substrate for plant growth than younger regolith,” the team wrote. Plants thrived better on materials brought back by Apollo 17.

Moll says the study leaves many questions unanswered. In particular, it remains unclear which components of the lunar substance were responsible for the problems affecting plants. “Many factors can play a role.” The same authors also point out these weaknesses: before the lunar regolith can be used as a local resource for plant cultivation, this material must be better characterized and optimized.

Download the new RND app for Android and iOS here for free.