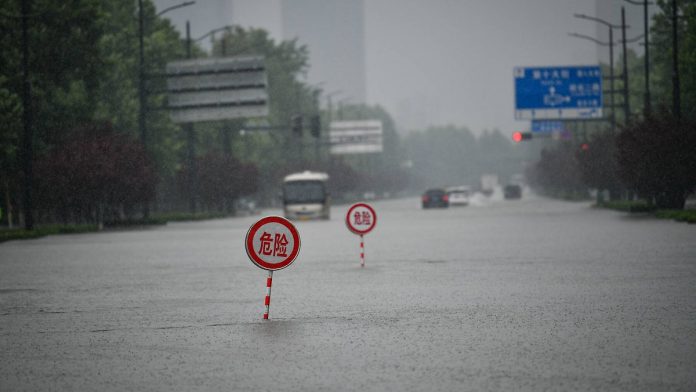 First comes the typhoon, then torrential rain: in Chengzhou, it turns the streets into torrents within a very short time. The subway sank, and the water in the wagons reached the shoulders of the passengers. So far there has been talk of 12 dead, but the number should be more.

Heavy rainfall for decades has caused massive flooding in the central Chinese city of Zhengzhou. State media initially reported 12 deaths. However, more casualties are feared. The subway flooded, with hundreds of people trapped in trains and tunnels, according to what was reported by official media and eyewitnesses on social media. Videos can be seen how the water sometimes reached their shoulders.

The People’s Daily reported that more than 100,000 people were taken to safety during the evacuations. Among them were about 600 seriously ill patients from Zhengzhou University Hospital. The power went out in the clinic.

In the early morning hours of Wednesday (local time) in the south of Zhengzhou, the dam of Guojiaju Water Reservoir broke. Details were not known at first. According to the “China Daily” newspaper, “Such rains usually occur only once every 100 years. The situation is bleak.”

Many streets in the city were flooded. Some turned into torrents. Cars swam in the water. Water and electricity supplies were cut off in many places. Traffic paralyzed. Buses broke down. Zhengzhou airport canceled 270 flights. High-speed trains were suspended and the metro network closed. Thousands of passengers were unable to get anywhere in the station. Looks like people also died on the subway. A photo on social media shows two people lying dead on the platform of a station on Line 5. Clothes cover their faces.

In the state media and in The Weibo SMS service has also circulated videos Dramatic rescue operations in which people are rescued from heavy brown floods. Internet users, however, complain that government censors have also deleted the posts.

According to meteorologists, Zhengzhou experienced the heaviest rainfall in 60 years. Severe storms were also reported from southern China, where another typhoon called “Simbaca” hit the ground near Yangjiang city with winds of up to 110 kilometers per hour in Guangdong Province. There were also severe floods in Inner Mongolia in northern China.