Home World “UK” instead of “GB” on British cars 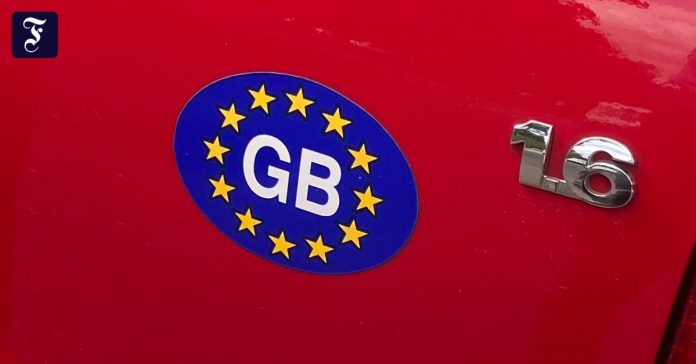 NSOnly two letters, but they derail many British drivers: in the future, cars for foreign trips will have to have a sticker on the back that says “UK”. The previous ‘GB’ would then no longer be valid on its own from 28 September, as confirmed by DOT, in which case an additional ‘UK’ label is required. The government says this makes it possible Britain’s exit from the European Union.

“The change of the national identifier from ‘GB’ to ‘UK’ symbolizes our unity as a nation and is part of a more comprehensive step towards using the ‘UK’ symbol in the entire government,” the department explained. The United nations be informed. Supporters maintain that people in Northern Ireland finally felt they were being dealt with. The British province does not belong to Great Britain, but it does belong to the United Kingdom.

“Waste of time, waste of money”

However, the island’s traditionalists reacted indignantly to the changes. “It’s a waste of time, a waste of money, and I don’t know why we should be concerned about it at all,” Conservative MP Ian Liddell Grainger said after the Daily Mail announcement. It also feels like a slap in the face for people who are so proud of Britain.”

President of the Automobile AssociationAA), the British equivalent of ADAC, Edmund King criticized that with “GB” the country code disappears. There are many old timers in which the “GB” metal plates have been incorporated or incorporated on the back. In the conservative Daily Telegraph, King criticized “Now you have to stick a tasteless ‘British’ plastic sticker next to it. This means ‘another element of British cars’ will be lost: the famous ‘GB’ label.” Against the protests of traditionalists and the AA, the Indeed, round tax badges on windshields were abolished in 2014 after nearly 100 years in favor of a digital system.

See also  COP26 outcome: These are the decisions of the Glasgow Climate Summit

This move is also interesting because the Prime Minister’s government Boris Johnson He recently responded to the sentiments of conventionally minded Britons with other decisions. For example, many EU rules that were considered strict and illogical and which London initially continued to enforce were abolished. In the future, grocers will again be able to use imperial units of measurement such as ounces and pounds to refer to weights. Beer drinkers are also happy to let the “Crown Stamp” return to pint beer mugs as a sign of proper calibration.

The government defended its decision. The Department for Transport said the majority of British cars did not have a national identity document anyway. A citizenship code is not required within the UK. Some also use only Scottish or Welsh abbreviations or symbols. The ministry said the driver would have to buy a poster for foreign trips anyway. The ‘UK’ stickers can be ordered online and bought at post offices and workshops and cost £1.50 (around €1.75).

Navalny accuses Google and Apple of colluding with the Kremlin