Home World Minsk allows the Iraqis to enter: Lithuania sends the army to the... 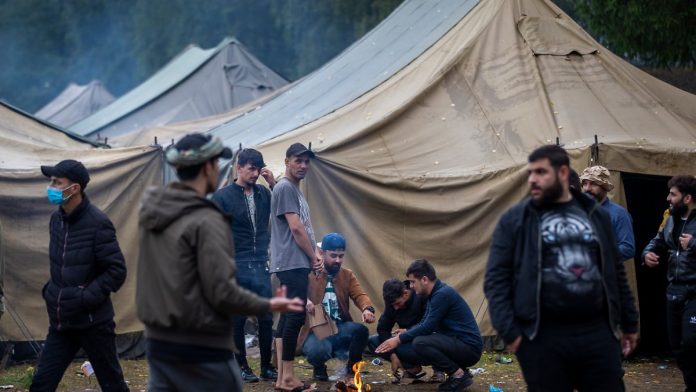 Minsk allowed the Iraqis to enter

Lithuania sends army to the border with Belarus

Since the beginning of the year alone, EU member state Lithuania has registered thousands of Iraqis at its border with Belarus. Now Vilnius is sending soldiers. Meanwhile, there is new evidence that Governor Lukashenko has airlifted Iraqis.

Due to the large number of immigrants entering illegally, Lithuania will use the army on the border with Belarus. President Gitanas Nauseda signed a corresponding decree, BNS news agency reported. Parliament had previously requested this. The military is granted expanded rights in the border area. Vehicles and people can be stopped and searched. Unspecified “special equipment” is also permitted. The soldiers will coordinate their actions with the border guards and the intelligence services.

Lithuania has struggled for weeks with an increased influx of migrants, especially from the Middle East, across the border with Belarus. This year alone, Vilnius has reported more than 4,000 cases of illegal border crossing. Interior Minister Agni Belutait said the situation had stabilized in the past few days. According to the Spiegel report, the Governor of Belarus Alexander Lukashenko systematically worked to ensure such large numbers.

Through Belarus to the European Union

Lukashenko announced at the end of May that Minsk would not prevent migrants from continuing to travel to the European Union – in response to tough Western sanctions against the former Soviet republic, cut off from the West. According to research conducted by the alleged file team with the support of Kremlin critic Mikhail Khodorkovsky, the authoritarian authorities in Minsk are systematically bringing migrants to the border with the European Union. According to Spiegel from the team’s documents, the Belarusian state-owned travel company Zentrkurort was said to have secured the issuance of visas to people from Iraq in May. Tourism Agency of the Presidential Administration Lukashenko.

The magazine quoted a woman who was working in a tourism agency issuing hundreds of tourist visas. She organized the visa invitations herself. According to this, the Iraqis arrived in Minsk with direct flights, were picked up from there and taken to one of the hotels. “I understand that all of this is illegal and I resigned in May,” the woman said.

According to Spiegel, Lithuanian security officials assume that the tourism agency wants to make Belarus attractive to refugees as a springboard to the European Union. She added that there are indications that Belarusian state-owned companies are using agencies to help Iraqis reach Belarus. Referring to the “Dossier Center” document, Spiegel noted the possibility of cooperation between Minsk companies and the Central Office for “Development of International Tourism with the countries of the Arab world and the Republic of Belarus”.