Home science Tiny fuel cells generate energy from the sweat of your fingers –... 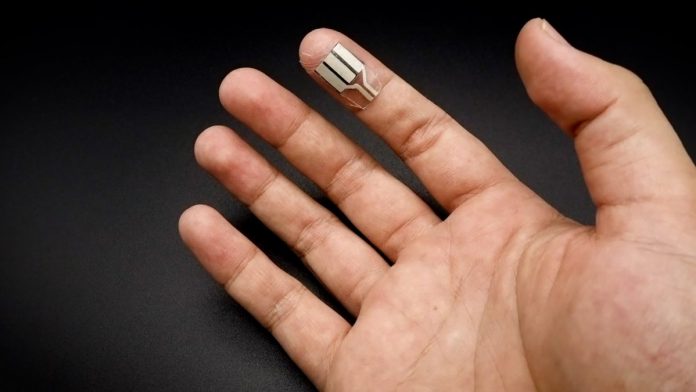 Nanoengineer Lu Yin of the University of California, San Diego (UCSD) and his team have developed a new type of biofuel cell as a film that supposedly generates energy from human sweat. In this way, the very thin and flexible film can collect energy constantly and even during sleep. The small device is also equipped with a piezoelectric generator that produces additional electricity when pressed. So the user won’t have to do anything more than wear the little film on their fingers to do daily activities, when they are resting and when they are asleep.

The researchers explained that so far, portable bio-powered autonomous systems have been very inefficient. Either it generates little power or it relies on power generation through movement, which is related to the user’s effort. An independent and effective energy complex for rest periods did not yet exist.

This energy complex is small enough to fit on fingertips, where sweat deposition is at its highest. It is at this point that the human body produces 100 to 1,000 times more sweat than other points thanks to more than 1,000 sweat glands. However, due to instant evaporation, we rarely notice it. The touch-up lactate biofuel cell then uses the high rate of sweating to generate bioenergy: an enzyme in the sweat causes a chemical reaction that releases little energy.

Vital energy is constantly collected during sleep, prompted by the constant contact of the fingers. This would give it a head start over all the other “on-body harvesters” developed to date – body-worn energy complexes. To maximize power generation, the scientists also placed small piezoelectric generators under the thin-film biofuel cell in order to use the mechanical energy of finger pressure. This is especially useful during the day, for example when typing on the keyboard or making other small changes in pressure.

According to the research team, the collector is so small that it covers only the tip of a finger, but it can passively collect up to 400 millijoules per square centimeter within 10 hours of sleep, which is equivalent to 0.1 milliwatt-hours. The amount of energy generated in this way is small but continuous. The yield can be increased by applying the system to several fingers using an adhesive film. Energy production naturally also depends on the individual perspiration rate.

Scientists see possible uses above all in wearable devices, that is, those useful little devices equipped with a microcomputer and sensors and usually worn directly on the body, often with skin contact. As smartwatches, fitness trackers, sports watches and other electronic assistants, they recognize, resolve and transmit information about body signals, vital parameters and other data.

Wearable smart accessory technology has already made great strides in terms of functionality and performance, but battery life or a rechargeable battery is often the limiting factor, says Yin. Wireless earbuds usually need charging after a few hours, and some smartwatches barely last a full day. According to Ying, biofuel cells could replace batteries or at least extend their lifespan. This development was also funded by the UCSD Center in California for Wearable Sensors and the National Research Foundation of Korea.

Even if a thin-film biofuel cell could generate a surprising amount of power with sweat and fingertip pressure: to power one Apple Watch The energy will not be enough yet. But that should be enough for a wristwatch or sensors and small displays. Yin’s research team is currently working on making the technology even more powerful. The study has been published “High return on investment on energy” Nano-engineers very appropriately in the specialist journal Joule.