Home entertainment ‘The Impossible Kitchen’: Tim Malzer is furious with the mission 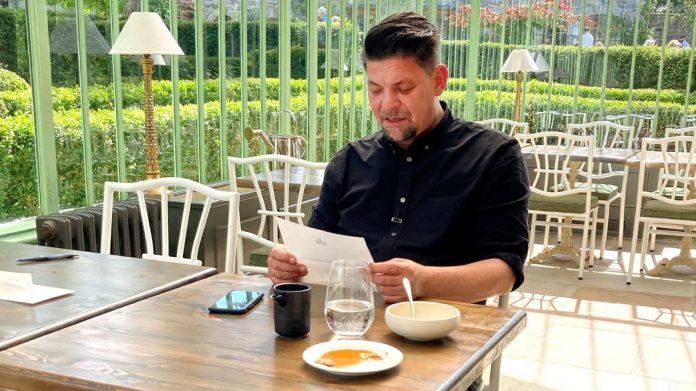 “I hate myself!” On the current episode of Vox’s cooking show “Kitchen Impossible,” star chef Tim Mälzer (51) despairs. And despite the fact that he “seldom had such a fair task” – “then he seldom hits like Koddersnot!” Embarrassing, he even snuck under the table.

What should he cook? Pannonia fish soup, created by the sister-in-law of rival Alan Weisgerber (54), Stephanie Chip-Isselbock (41), who runs the vibrant Ugäu Winery in Burgenland, Austria, with her husband Edward Chipp (45). Unpacking her “Kitchen Impossible” black box of surprises, Mälzer was delighted with an “incredibly beautiful dish” that tasted “insanely delicious”: “Exactly my style!”

‘Incredibly stupid’: Tim Malzer would have ‘liked to give up’

He didn’t know “now what I should fail at”. Well: it was the first layer on the stew: a fish patty that got too chewy at first, then too soft, and a fish skin he accidentally threw into the stew pot, making it impossible to get crunchy right. He described himself as “incredibly stupid” and would have liked to “give up”. In the end, though, the ten-member jury was kind to Malzer and gave him an average of 7.5 out of ten possible points. But the lowest point in cooking was still ahead of him…

First, however, Weissgerber had to prove himself: “It’s clearly tongs,” said the Alsatian, who has lived in Austria for decades, analyzing the dish of his French compatriot Emmanuel Renaud (54), chef at the three-star restaurant ” Flocons de Sel”. In Megève in the Savoy Alps. It was not a problem to taste the ingredients (potatoes, carrots and assorted mushrooms) in the “vegetarian millet” that was served. First, to bring the individual layers of the filigree artwork together and second, to get it done with precision and accuracy as with the original, but more than that.

Similar to Mälzer, Weissgerber is not friends with too many “twists”. The difference: He doesn’t rattle as fast as his opponent and thus finally earned a colossal 8.5 points – although he replaced his top-ranked Cascara pectin with lemonade.

“Who cuts pumpkin seeds in half?!”

Could Malzer beat that in the second round in Kildare, Ireland? Here at two-star restaurant Aimsir, he was supposed to recreate “rapeseed oil ice cream with carrots” for Jordan Bailey, 32, from Cornwall, England – but that wasn’t what shocked him. On top of the dessert, there was a third of a sliced ​​pumpkin seed with caramel. “This is a meaningless provocation!” Malzer said indignantly. “Who cuts pumpkin seeds in half? Why?”

You can understand it a little: compared to something like this, the wonderful French millefeuille was completely rustic! He had no idea that the supposedly simple caramel would eventually drive him crazy, since he was tired after only five cores. The star chef told Billy that he was kicked out of a meditation course at the time. His dry response: “That doesn’t surprise me!”

That Mälzer created ice cream based on cornflakes and oat milk instead of rapeseed ice cream – okay. That carrot juice didn’t work well for him – okay. He also managed halfway through sea buckthorn puree on ice cream. But the caramel, which he had originally planned for only ten minutes, ended up eating it for two hours and didn’t fully stick to the kernel. Jordan Bailey’s secret: He used isomalt and glucose, while Tim Malzer used only sugar and water. Story end: A trifle 4.5 – thus for a total of 12 points.

Tim knows I hate it.

It already seemed like a clear victory for Weissgerber, but it’s actually getting tight again. Not because of Marinella Filipponio’s Ascolane del Piceno olive oil, stuffed with meat and vegetables, baked and fried, which he was asked to prepare at her Migliori restaurant in Ascoli Piceno, Italy, but because of the second assignment that surprised him when he was already in the middle of preparations: Zuppa inglese.

Sweets, as he already revealed, are not exactly his specialty. “shock!” The chef decided to gourmet. “Not fair!” Because: “Tim knows I hate it.” However, he made an effort and also got a good biscuit base, which we soaked in syrup instead of herbal liqueur. And chocolate cream and light Inglis cream, which he made with ready-made pudding powder and artificial vanilla – sacrilege! “I think she’s going to kill me!” Weissgerber commented on the chef’s stern outlook. Fortunately, she didn’t, but the jury verdict was mixed: 4.1 points, for a total of 12.6, thus a very small victory over Tim Malzer.