Home World Tensions in Montenegro: protests against the new head of the Church 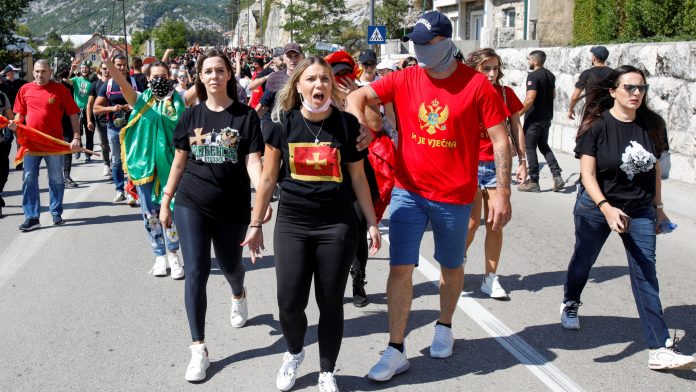 Montenegro has been independent for 15 years – but many residents still consider themselves Serbs. In this case, the inauguration of the new head of the Serbian Orthodox Church led to conflict.

Protesters clashed with police ahead of the inauguration of the new head of the Serbian Orthodox Church in Montenegro. Hundreds of people stormed police barricades on the outskirts of Cetinje in the south of the country and set up roadblocks on Saturday, AFP reported. People chanted slogans such as “This is not Serbia!” and “Long live Montenegro!”.

By evening, all roads to the city were closed, as the new Metropolitan Joanikije would be brought into his office.

Metropolitan Gwankeji (left) is scheduled to take office on Sunday.

Every third person considers himself a Serb

Montenegro gained its independence from Serbia in 2006. Nearly a third of the population of 620,000 consider themselves ethnic Serbs, and some to this day deny the independence of Montenegro. The imminent inauguration of the head of the church has once again escalated tensions.

The government in place since December is close to the church. In December, it amended a law introduced by President Milo Djukanovic’s Socialist Party to make hundreds of Serbian Orthodox monasteries state-owned.

The president is on the side of the protesters

Djukanovic also arrived on Saturday night to protest the inauguration of the new Metropolitan in Cetinje. He led the country to independence from Serbia through a referendum. Last year his presidential party lost the general election, which is why it lost most of its power.

See also  Silence on Russia: China accuses the United States of escalating the conflict in Ukraine

The new government is supported by the pro-Serb camp, but also by the pro-Montenegrin liberals and the Greens. Alliance partners accuse Djukanovic of corruption and involvement in organized crime.

After a scandal in the committee: FDP spokesman Faber offers his...