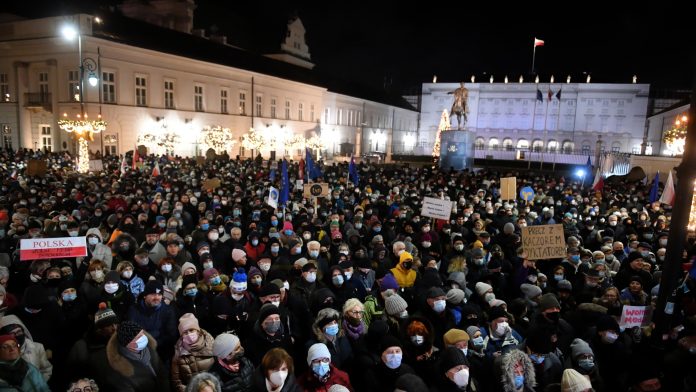 Tens of thousands in Poland protested the new broadcasting law. It is directed indirectly against TVN, which is critical of the government, which is part of an American group. However, President Duda can still stop the law.

Tens of thousands of people took to the streets in Poland on Sunday to protest against the new broadcasting law. From the critics’ point of view, it could restrict press freedom. The demonstrators carried posters reading “Free flags…Free people…Free Poland” and “We have the right to know the truth.”

In Warsaw, protesters gathered in front of the presidential palace. Opposition leader Donald Tusk called on the crowd to work for a change of government. Warsaw Mayor Rafal Trzaszkowski has warned that the internet will soon be censored and Poland’s last non-governmental information source will be shut down.

There were also rallies in Gdask, Szczecin, Pozna, Kraków and many other cities. Police and organizers did not give the exact number of participants.

Parliament passed the revised law on Friday. In the future, broadcasting licenses will only be allowed to be issued to foreigners if they have their headquarters or residence in the European Economic Area. In addition, the licensee must not rely on a person whose principal place of business is located or resides outside of it.

According to critics, the law targets the private TVN channel, which is part of the US Discovery Group through a holding company registered in the Netherlands. Politicians from the ruling Law and Justice party accuse TVN of spreading propaganda for Lukashenko while covering the crisis on the eastern border.

President Duda is considering a veto

The Polish government officially claims that the law serves to protect national security. It must ensure that no company outside Europe controls the media that shape public opinion in Poland. The decision is now up to President Andrzej Duda. He indicated that he could object to the law.

The US government has also sharply criticized the new law. The State Department in Washington said it was “deeply concerned” about the provisions that “undermine freedom of expression, impair press freedom, and undermine foreign investors’ confidence in their property rights.” The United States encouraged Duda to defend the fundamental rights guaranteed by the Constitution.