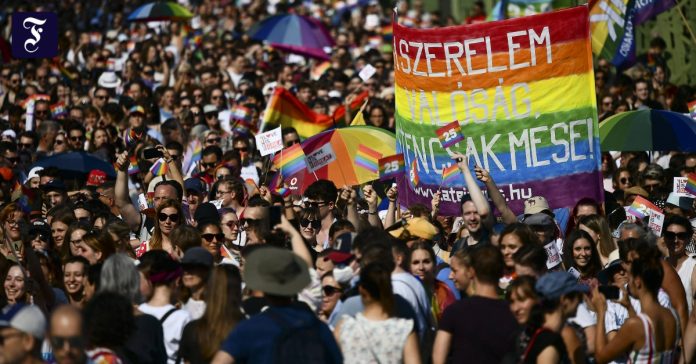 TThe Hungarians Osinde took part in the Pride Parade in Budapest on Saturday. This was the largest number of participants since the first rally 26 years ago, a spokeswoman for the organizers, Joanna Majersek, told AFP. An AFP correspondent estimated the number of protesters at more than 10,000. Given the criticized LGBTQ law and “anti-homosexual propaganda” by the Prime Minister Victor Urban Majercsik said many people wanted to show their “support for the LGBTQ community”.

Dozens of diplomats from diplomatic missions in the Hungarian capital also took part in the colorful parade through the streets of Budapest. In the past few years, the event has been largely disrupted by right-wing extremists. Gay abuse was recorded this year, and there were no further incidents. Police separated about 200 supporters of conservative right-wing Prime Minister Viktor Orban from the parade.

An LGBTQ law banning gay and transgender “advertising” came into force about two weeks ago. Books on the topic must now be labeled in Hungary with the “No 18s” note, and LGBTQ-related films are no longer allowed to stream during prime times.

The official goal of the law is to protect minors. On the other hand, activists speak of a blow against the LGBTQ community. The English acronym LGBTQ stands for lesbian, gay, bisexual, transgender, and homosexual; Critics in Hungary argue that members of these sexual minorities face discrimination.

The European Union has initiated infringement proceedings against Budapest in response to LGBTQ law. European Commission President Ursula von der Leyen said Europe would never allow “parts of our society to be discriminated against”.