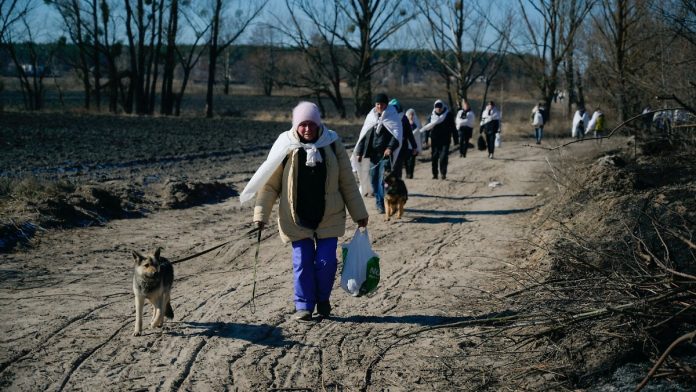 Until civilians can leave Ukraine, Moscow is now giving daily escape corridors. However, only for Russia, which the Ukrainian government has always rejected. Now you should agree within a very short time.

The Russian military announced the creation of daily evacuation corridors from Ukraine to Russia. “We officially announce that the humanitarian corridors in the direction of the Russian Federation (…) will now be opened unilaterally every day starting at 10 am (8 am CET),” Colonel-General Mikhail Mizintsev said. In addition, Moscow offered the Ukrainian side to evacuate civilians from Kyiv, Sumy, Kharkiv, Mariupol and Chernihiv to other Ukrainian regions.

Kyiv must approve the relevant routes by 3 a.m. Moscow time (1 a.m. CET) on Friday morning. Russia also demands lists of people and vehicles before they attempt to cross the escape corridors. This was reported by the Russian news agency, citing government officials. The Ukrainian government has so far refused escape routes to Russia and Belarus.

The situation in Mariupol is catastrophic

Moscow also announced that craftsmen from the Zhytomyr region should be given access to the former Chernobyl nuclear power plant so that they can repair damaged power lines.

According to observers, the humanitarian situation is now catastrophic, especially in the coastal city of Mariupol on the Sea of ​​Azov. Several attempts to get people to safety in the past few days have failed. Russia and Ukraine accused each other of sabotaging civilians’ exits and violating the agreed-upon ceasefire.

According to Ukrainian sources, in the past two days, at least 60 thousand people were expelled from the cities of Sumy, Trostianets and Krasnobyl. About 20,000 people were evacuated from cities in the Kyiv region on Wednesday.

The Russian military reported that over 187,000 people had already been brought into Russia from Ukrainian cities. Moscow had already begun evacuating Russian civilians from Donbass before the start of the invasion of Ukraine.

Fires in southern Europe continue to burn – up to 40...

Ronnagram and Quettabyte: Huge names are given for the first time