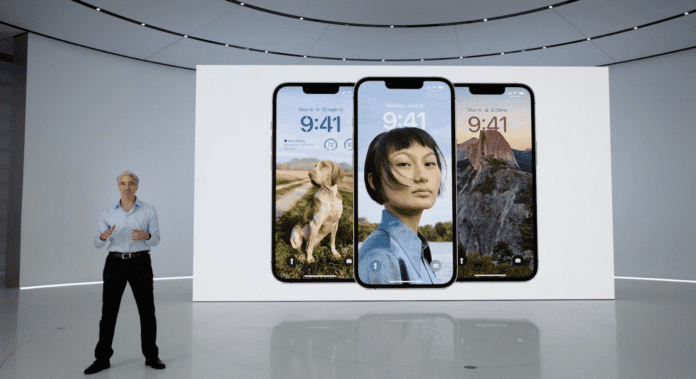 iOS Should Get More Personal, Smarter: Apple announced an all-new lock screen for iPhones Monday at WWDC 2022, which the user can design and configure in color, among other things. Small status widgets bring additional information to the screen without having to unlock your iPhone — like weather data or your next appointment. It is also possible to create multiple lock screens and switch between them.

Users should also have more control over their notifications and be able to quickly hide them on the lock screen. The new Live mode integrates certain information into notifications as a live view, such as the status of food delivery or sports scores. Apple is also expanding the Focus mode, which can also set the lock screen and interfere with applications in the future, for example in the Safari browser – depending on the configuration – only showing websites related to work or entertainment. Third party developers have the option to integrate focus mode into their apps as well.

In the Messages app, iOS 16 allows you to edit iMessages afterward or undo sending for a short while. Users can also mark their iMessage conversations as unread. Craig Federighi, Apple’s chief software officer, emphasized that the three functions are among the most requested new features of the messaging service. The update integrates SharePlay into Messages so you can chat in parallel while playing content simultaneously.

Apple’s built-in Dictation feature is available with iOS 16 at the same time as entering text via the keyboard. Recognizing text in images (Live Text) will also work with videos in the future and should offer certain functions such as converting currencies directly when copying text content. There will be a direct text API for developers to integrate text recognition.

New Apple Maps is coming to Switzerland and France. Intermediate stops when planning a route. In addition, a deeper integration of contactless local transport cards is planned. More detailed map materials are available from Apple for developers to integrate into apps, and a look around — Apple’s Street View — can then be integrated into other apps.

Apple is also expanding Family Sharing, which lets you share and use certain content and iCloud services with up to five family members. In the future, Apple also promised a shared iCloud photo library — as well as improvements to screen sharing and parental controls.

Innovations for home, CarPlay and fitness

iOS 16 comes with a revised Home app to control home automation, and information from smart home devices can also be displayed directly on the lock screen. Apple has once again confirmed its support for the new Matter standard.

Apple CarPlay will be integrated deeper into cars in order to enable control of vehicle functions such as air conditioning or radio. Vehicle data such as speed and fuel level can then also be displayed in CarPlay, for example in the displays that replace the dashboard. The compounds that support this are currently unclear.

Apple’s Fitness app should also appear in iOS 16 for users who don’t have an Apple Watch and be able to track steps and calories (for example via workouts in third-party apps) — as well as share activity with friends.

The message will be updated further.