Home World Forest fires: the situation in Greece and Turkey is approaching the peak 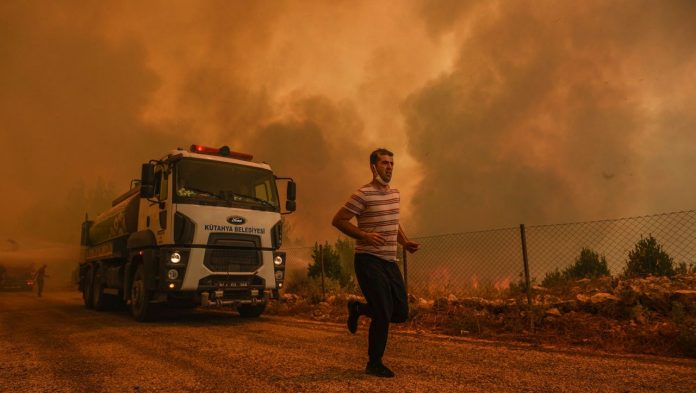 in a Greece During the night, more than 500 firefighters tried to bring the bushfires under control in the Barnes Mountains, about 30 kilometers northwest of Athens.

In the worst heat wave in decades, 81 individual bushfires were counted on Tuesday. At temperatures above 40°C, the winds continued to ignite fires. In some places, temperatures of over 46°C have been measured. Homes were set ablaze, and evacuation orders were often issued.

In addition to the firefighters, more than 300 police officers, nine helicopters and seven aircraft were on duty in the heavily planted area. “We will continue to fight all night,” said the deputy head of the Civil Defense Nikos Chardalias.

A huge cloud of smoke was seen over Athens. In Tatoi, 20 kilometers north of the capital, buildings were evacuated and the north-south highway was partially closed. People fled in cars and motorbikes, and a riding school saved their horses at the last minute. According to the authorities, 315 people were taken to safety. No one was hurt, but some complained of breathing difficulties.

Disaster officer Chardalias described the fires sparked by strong winds near Athens as “extremely dangerous”. “We keep fighting hour after hour, and saving lives is a top priority,” Chardalias said Tuesday night. “These are crucial hours, our country is in the worst heat wave in the last 40 years.”

In Turkey, too, the situation is becoming increasingly dangerous in some places. In the afternoon, the flames moved toward a coal-fired power plant in the southwest. “The situation is very dangerous, the flames have reached the edge of the power station,” Milas Mayor Mohamed Tokat wrote on Twitter.

The fires also broke out near hotel complexes in the south. Spain And Croatia sent a firefighting plane after Turkey requested help from Europe. Machines from Iran, Russia, Ukraine and Azerbaijan are already in use.