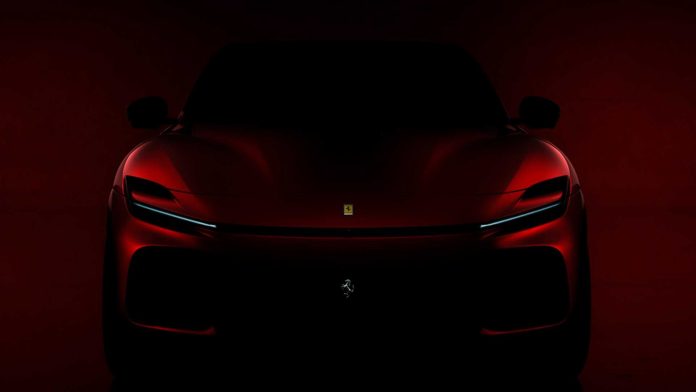 Ferrari Purosangue is finally showing itself in all its glory. Well, half of the Purosangue. Here is the first teaser for the sports car brand’s first SUV. An official photo after months (or rather years) of rumors, advertisements, spy shots, etc. Now the model shows us its front end. The rest remains in the dark, but it is enough to understand what the design will be like.

Visually, the Purosangue follows the modern Maranello models, with very narrow headlights linked to an equally narrow grille with massive side air intakes. The hood is grooved with deep ribs. And what will be hidden under it?

“I’ve heard these rumors…and we are happy to confirm that they are true (some of them). They will all be revealed later this year.” With that phrase, Ferrari accompanies the social media post showing the first official image of the Purosangue, and also jokes a little about the photos posted a while ago that showed it (in a pre-series version) on the production lines.

Now everything is black (or rather red) on white (no, still red), which heralds a profound revolution for the company. A revolution, however, isn’t referred to simply as an SUV: On Maranello, the Purosangue is referred to as FUV, an acronym for “Ferrari Utility Vehicle” to denote its exclusivity in luxury and/or sportier models with more ground clearance.

In fact, one should not expect crazy ground clearance from the Purosangue, especially since Ferrari wants to achieve sporty behavior that is present in the DNA of Maranello cars.

See also  These Germans are new to the list

Precisely for this reason, the rear doors (a condition necessary) can open in opposite directions, to stand out from the crowd and respect one of the brand’s guiding principles: never use a four-door car. So the Purosangue will be an elevated Gran Turismo, with passenger compartments for four and a level of space never achieved by a Ferrari, while maintaining the performance of a supercar.

Yes, but how fast is the Ferrari Borosangoy? While the design, with its nods to the SF90 Stradale, is no longer a secret, it remains to be seen which engines will power Maranello’s FUV. Now that supercar electrification is no longer an issue and the V6 engine has been revived with the 296 GTB, a hybrid version of the Purosangue is expected.

But Ferrari is in tune with the naturally aspirated V12, so who knows – perhaps in the future there will also be an extreme version of the FUV with a V12 engine “borrowed” from the Ferrari 812 to become the most powerful SUV in the world? You must have a Lamborghini Urus in your eyes…