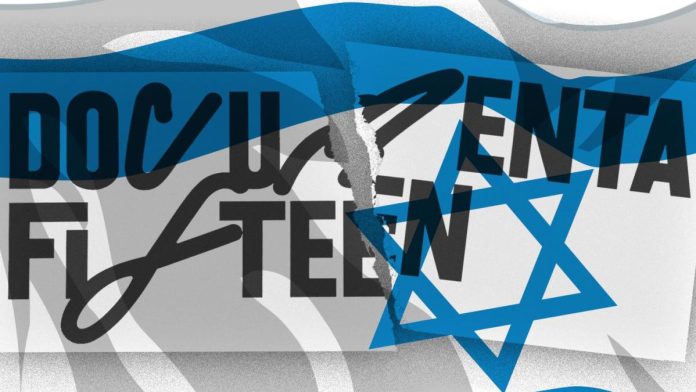 aOn Wednesday, Kassel Mayor Christian Gesell finally made a big appearance. People in colorful clothes sat in the Auestadion and cheered for him, the sun was shining, and now the discussions about the great art exhibition had to come to an end.

In his speech at the 15th Documenta press conference, the mayor himself celebrated that the Documenta, in which “the freedom of art can be experienced”, is a “wonderful gift”, “a link between the city of Kassel and the world”.

Despite having “questions and discussions that seem typical of our media world,” he expressed himself somewhat clumsily. But “questions that were not up for discussion at all were posed by the media.” The mayor declared that the city of Kassel and the Documenta clearly stand on the side of artistic freedom and curators. “And now I heartily invite the world to join us.”

With this, the SPD politician may have wanted to draw a line under a debate that has been simmering over and over since January: the so-called forced question, which is whether the gallery’s main commissions and art groups roam with the anti-Israel and anti-Semites who, with their art, make They themselves follow a political agenda.

In fact, members of the Indonesian group Ruangrupa, which organizes the document, signed appeals from the BDS (Boycott, Divestment and Sanctions) organization, which calls for a boycott of Israel. They carried messages calling Israel an “apartheid state”. Head of the “Funding Question” group Palestinian artist Yazan Khalli, in a 2014 interview, wished that the “Zionist state” would ideally disappear – just the “colonial project of white Europeans.”

It should have provoked a contradiction. The Bundestag decided in 2019 that the BDS movement would eventually call into question Israel’s right to exist. The extreme nature of the blanket call for a boycott has led to the classification of Israeli citizens on the Jewish faith as a whole. The resolution says this is unacceptable and must be strongly condemned. Coalition activists should be denied public funding.

Now there are at least 20 people from the Ruangrupa, the issue of funding and technical direction for the Documenta who have a problem with Israel – and they are collecting tax money. The “Castle Alliance Against Anti-Semitism” took a closer look at the Documenta participants in January.

It is difficult to answer the question whether these views can also be found in the art exhibited. For example, there is an image from Muhammad al-Hawajri’s series “Guernica of Gaza”, where he compares the military conflicts in the Gaza Strip with the German Luftwaffe bombing of the Spanish village of Guernica in 1937. Politically and historically, the comparison is untenable, but the image itself should not be shaken yet He established the German justification, unlimited solidarity with Israel.

A painting by the Taring Padi Collection hanging in the C&A Building shows a painted work in a post-Soviet style with a pig draped in an American flag in the lower left corner.

For the founder of the “Castle Movement Against Anti-Semitism”, Jonas Dorg, this is “crude incitement”. Anti-Americanism is the twin of anti-Semitism. Is it still tasteless, or is it really anti-Jewish?

Anyway, it’s the expected outcome of the show. Because the organizers of Documenta Fifteen consciously put the artistic direction in the hands of Ruangrupa, because they wanted to see the world from the “global south”. So the responsibility passed to a group, which, in turn, invited other groups from the “southern”, which were not geographically defined in more detail, to Kassel. The idea of ​​”Lumbung” was born: this is what Indonesians call a rice barn in which they store and share the harvest surplus together.

Lovely idea. Just something missing in the Kassel photo fold: artists from Israel. This was also to be expected in view of the chosen responsible persons. Mayor Giselle said In January to Deutschlandfunkthat “with the appointment of the Ruangrupa” one consciously accepted “the discussion on this subject – also outside the reasons for the German state”.

The example of the Biennale in Sao Paulo in 2014 shows how close the organizers are to the idea of ​​a boycott. At the time, Charles Eich, now a member of the Documenta’s advisory board, was the curator of the exhibition. Several artists, including Ruangrupa member Fred Raccoon, wrote an open letter to the public because they did not want to accept the Israeli Embassy’s co-funding for the biennial. Rather than contradict the allegations, Esche joined the call for a boycott of the artist – as curator of the exhibition.

Documenta’s exhibitors repeatedly emphasize the postcolonial context of their work, thus placing their art under political premise. They are interested in remembering and denouncing the colonial trauma.

But the “global south” targets Israel in the first place by criticizing the “white colonial project,” as the Palestinian Khalili called it. Ironically, a country founded shortly after the Holocaust must now attract a large portion of postcolonial criticism – isn’t it supposed to be anti-Semitic?

It remains to be seen if the many misunderstandings and mutual accusations can still be clarified. The exhibitors canceled a round of talks titled “We Need to Talk”. Ruangrupa responded to the accusation of anti-Semitism by accusing the criticism itself of being racist and threatening artistic freedom.

There are still at least 99 days to argue. In any case, it seems that reconciling positions is out of the question.