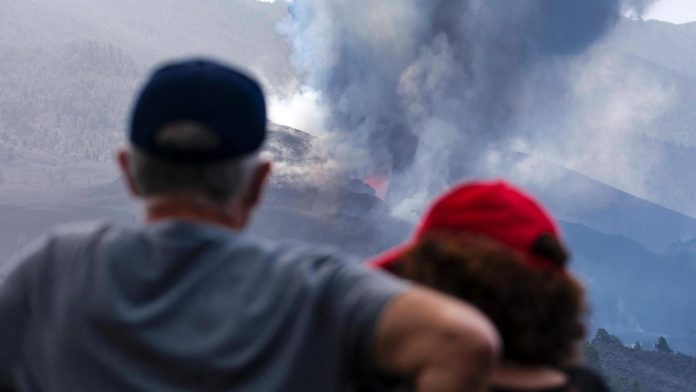 The volcanic island of La Palma is restless. Now the islanders must not leave their homes for the time being. Toxic gases are not currently moving.

Residents of the Canary island of La Palma are encouraged to spend as little time as possible in the fresh air due to the gases and black smoke that may be hazardous to health due to the volcanic eruption. Authorities lifted a curfew for 3,500 people in the affected areas on Saturday after an improvement in air quality. The Foreign Ministry in Berlin advised against making non-essential trips to La Palma. “It cannot be ruled out that there will be evacuations to other areas or perhaps only a temporary closure of La Palma airport,” said a memo published on Saturday.

On Friday, a new vent opened over the volcano from which lava flowed. Volcanologist Miguel Angel Morquinde spoke of “intensive activities”. So far, about 6,000 people have been evacuated from the endangered areas around the Cumbre Vieja volcano.

About 800 buildings have been destroyed since the outbreak of the disease on September 19. However, very few of the islands’ 83,000 inhabitants are affected by volcanic eruptions. “Less than eight percent of the island was affected by the volcano,” Morquinde said. The rest of them lead a normal life.