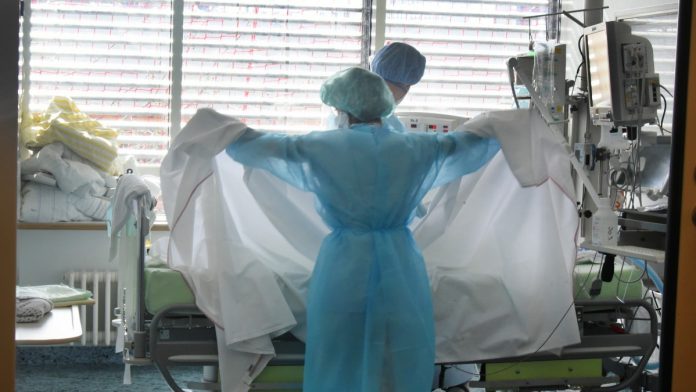 Turkey has reported the highest number of Covid-19-related deaths in a single day since the pandemic began. On Monday, the Ministry of Health announced that 341 people have died from or due to Covid-19 within 24 hours. This increased the total number of deaths to 36,267. The authorities also reported about 55,000 new infections in one day on Monday, bringing the total number of people infected in the country with a population of about 84 million to about 4.3 million.

The highest incidents that lasted seven days are currently occurring in the Canakkale Province, western Turkey, with about 963 cases per 100,000 inhabitants, and in Istanbul, with about 921 cases per 100,000 inhabitants. Turkey started the vaccination campaign in mid-January and is mainly injecting vaccines from the Chinese manufacturer Sinovac. 4.5 million doses of the Biontech / Pfizer vaccine are now also available.

The United States government announced that the highest travel warning level will be extended to about 80 percent of all states. According to the State Department, they should be included in the fourth level, red – “do not travel” – due to “an unprecedented risk for travelers.” Currently, 34 of the 200 or so countries fall into this category. To reach 80 percent, some 130 states would have to be added.

The European Medicines Agency (EMA) is due to provide an evaluation of the use of a coronavirus vaccine from the US company Johnson & Johnson (J&J) on Tuesday. The focus is on reports of rare blood clot formation after vaccination with the vaccine. Last week, the European Medicines Agency said it was convinced that the benefits of the vaccine outweigh the risks. It was approved by the authority on March 11, and deliveries began in the European Union a week ago. As a result, the product has not been used widely in the European Union. US authorities advised to stop J&J vaccinations after reports of blood clots.

In the future, Greece will waive the mandatory coronavirus quarantine for visitors from other European Union countries under certain conditions. The prerequisite is that they are fully vaccinated for two weeks or that they have a negative PCR test no more than three days old, the Athens Civil Aviation Authority announced on Monday. The regulation also applies to visitors from the United States of America, the United Arab Emirates, and Serbia. It is valid for guests from Israel since March.

Since the start of the year, the Greek government has been pushing for the development of a vaccination certificate at the European Union level. The goal is to salvage tourism, from which roughly a fifth of Greece’s economic output usually comes. According to the current situation, the vaccination certificate should not be available until June. However, Athena wants to declare the tourist season open on May 14th. Until now most hotels in Greece are closed.

USA: Every adult person was vaccinated with at least one dose

Almost every adult is completely vaccinated. In the particularly endangered age group 65 and over, 81 percent received a first dose, and about two-thirds were fully vaccinated. The White House Coronavirus Working Group said it currently has an average of more than three million vaccines per day.

See also  Ulf Bouchardt on the economic and energy crisis: an unprepared country

Most vaccinations are performed in the United States using the active ingredients of the US companies Moderna and Pfizer, and the latter developed the preparation with its German partner, Biontech. Vaccinations containing the active ingredient from the US pharmaceutical company Johnson & Johnson have been suspended after six cases of venous thrombosis were reported in the United States. The Johnson & Johnson vaccine only needs to be injected once to be fully effective; The other two drugs require two doses.

In the United States, health authorities recorded at least 42,487 new cases of corona within 24 hours on Monday. The total number increased to more than 31.37 million, according to a Reuters tally based on official data. The number of deaths increases by at least 293 to 567 538. The United States is the country with the largest number of injuries and deaths worldwide.

More than 140.97 million people around the world have been confirmed to be infected with the Coronavirus. This gives a tally to Reuters based on official data. More than 3.15 million people have died from or because of the virus.

China is testing a vaccine mixture

Chinese researchers are testing the efficacy of a combination of two vaccines against Covid-19. In a study with around 120 participants, a single dose of the vaccine from Can Sino Biologics would be administered first, followed by a dose from manufacturer Chongqing Zhifei, according to registry data from the clinical study. Both vaccines are part of the Chinese dual vaccination campaign.

See also  Prince Harry: Why people should be celebrated when they leave a job

Due to the Coronavirus pandemic, millions of people in the UK are waiting for hospital treatment. The NHS Providers, which includes all hospitals and individual institutions of the National Health Service (NHS), said in the hardest hit areas, it would take up to five years to clean up standing water.

According to NHS England, around 4.7 million people were waiting for treatment at the end of February, and nearly 400,000 of them had been on the waiting list for more than a year. In February 2020, there were 1,613 people who had to wait that long.

NHS providers have asked the government for additional financial support. “The scale of the impending backlog is very frightening,” said the president of the umbrella organization, Chris Hobson. Not only severe cases, such as cancer patients, are affected, but also those with mental illnesses. What is needed is a joint approach by the NHS and the government to increase the number of jobs and invest in new diagnostic options and treatments.

Italy wants up to 1,000 fans to be allowed on its soccer stadiums

Italy will ease coronavirus restrictions from April 26. Contact sports will be allowed again across the country starting Monday following the following. Starting May 1, up to 1,000 fans will be accepted into the stadiums. This is what the Italian government decided.

In indoor sporting events recognized by the CONI National Olympic Committee, up to 500 spectators may attend from this date. Spectators have not been allowed to be in sports facilities in Italy since last October.