Home sport Conference League: LASK goes up with a concert against Novi Sad 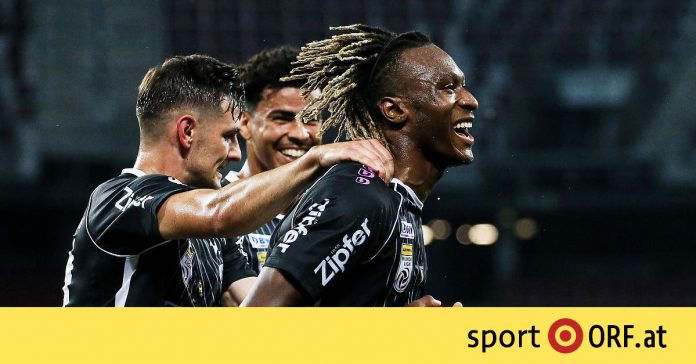 LASK suffered an early deficit by Urus Kabic (13th) and held it thanks to a strong performance and a double by Mamoudo Karamoko (34/penalty kick, 53rd position) and other goals by Thomas Geiginger (56th), Marvin Putzmann (67th) and Hussain Palic (80) and Alexander Schmidt (87) have the upper hand. In the decisive duel for entry into the group stage, the Linzers will meet on August 19 (the second leg) and on August 26 in St. Johnston. The Scots, who had never participated in the European group stage, lost to Istanbul Galatasaray after a 1-1 draw in the first leg with a score of 2-4 and have to move to the third European Cup category.

After a deserved narrow 1-0 win in the first leg, it wasn’t easy for LASK in exile at Wörthersee, at least at first. Thallmer was already anticipating “core work” in advance of his team. He’s moved up three places compared to last 1-1 in WSG Tirol, alternating with Yannis Letard, Goiginger and Balic in the starting lineup instead of Dario Maresic, Hong Hyun Seok and Schmidt.

After equalizing with a penalty, Karamoko made it 2-1 by a minute’s end.

The match started with a Goiginger shot (the goalkeeper was saved by Nikola Simic/6) from LASK’s point of view not bad. However, the guests also – not quite as expected – showed some offensive spirit and provided the first shock: the Linzers did not clear the ball properly, after all, Yannis Letard made a mistake, and Kabic unsustainably withdrew for Alexander Schlager in the penalty area.

Upper Austria reacted appropriately after a brief moment of shock, bringing the now more defensive Serbs to dynamic play and plenty of movement even without the ball under pressure, even if they had to give up real chances for now. Karamoko’s 16th start was too quick for Aleksandar Bosnik: he scored the offense with a precise low shot into the left corner himself.

Goiginger completed a nice offensive combination with a 3:1 hit.

Balic (41) and Lukas Grgic (45) had good chances to take the lead against Simic before the break, after the break Simic intervened decisively against Karamoko (49). A little later, Karamoko scored twice after a counter-attack and a defensive foul, and just three minutes later Guijinger was there with the initial decision.

“Joker” Schmidt makes half a dozen and hits the final score shortly before the final whistle.

LASK’s team didn’t calm down clearly against the gifted Serbs: Substitute Botzman headed 4:1 after a “dance” involving a cross from Grgic, and Balic increased it to 5:1 with an accurate long-range shot at the end. In a collaboration between two Jokers after helping Enrique Wilde, Schmidt tops the final score.

Dominic Thalhammer (LASK coach): “It’s good that the button opened for us today in the second round. The way we created our scoring chances reminds me a little bit of our big win over Donajska Strida last year (7-0, note). We followed this game with a strong fall – it would be great if We were able to do that this year as well.”

Thomas Geiginger (LASK’s top scorer): “We were not happy with the first 30 minutes, there are a few things we have to improve. But we showed morale, and I think the second half was very good. We rewarded ourselves and played a little frenzy.”

Hussein Balic (LASK’s top scorer): “Going through this season we need a little bit more time to play. Then we got 0:1 from a strange situation. But we knew we had more quality and we had to bring more power to the pitch and that we couldn’t relax in winning. 1-0 from the first leg. In the second half we set off fireworks.”