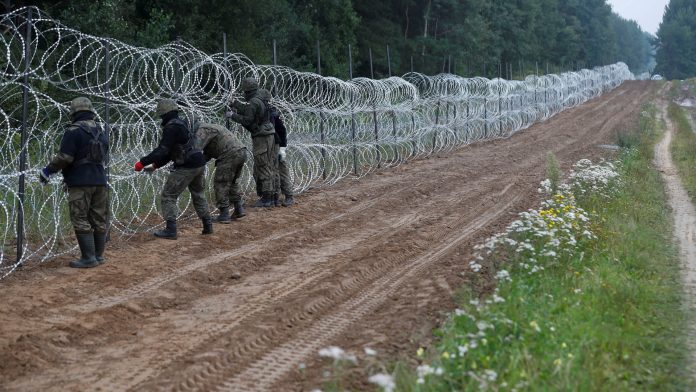 For months, immigrants from Belarus have been trying to get to Poland without a visa. The Polish parliament has declared a state of emergency, which it is now extending. As a result, aides and journalists are still unable to reach the border.

In light of the continued influx of migrants, the Polish parliament extended a state of emergency at the border with neighboring Belarus. Deputies to the lower house voted Thursday evening in favor of an extension of another 60 days, Polish media reported. Previously, President Andrei Duda made the corresponding request.

During the House debate, Bowie Soluch, the head of the National Security Office, stated that nearly 7,000 immigrants attempted to illegally cross the border in this region in September alone. In September of the previous year there were about 120. With his decision to extend the state of emergency, “pressure organized by the Belarusian regime to destabilize the European Union” must be faced, according to a tweet from the House of Representatives.

Belarus’ reaction to sanctions is suspected

Previously, on September 2, Poland imposed a state of emergency for an initial period of 30 days on a border strip three kilometers wide and 418 kilometers long. Since then, journalists and aid organizations, among others, have been denied entry.

The government in Warsaw has accused the governor of Belarus, Alexander Lukashenko, of moving refugees from crisis regions to the external borders of the European Union in an orderly manner. Lukashenko announced at the end of May that Minsk would not prevent migrants from continuing to travel to the European Union – in response to tough Western sanctions against the former Soviet republic. In addition to Poland, Lithuania and Latvia, it also complains of increased arrivals of migrants, especially from the Middle East, at their border with Belarus.

NGOs warn of a crisis

Aid organizations suspect that Polish border guards are sending most of the migrants back to Belarus. However, due to the emergency at the border, it is not possible to verify this, as journalists and aides are not allowed into the area.

The Catholic Church in Poland has already called for more attention to the fate of refugees in the past. Non-governmental organizations recently warned of a crisis in the border areas due to low temperatures. They also accuse the government in Warsaw of preventing people from applying for asylum in violation of international law. Several migrants have died at the European Union’s border with Belarus in recent months.

More transparency, please: the European Union wants to clarify the situation at the border

The ex-US president starts his own show – and it gets...

Climate crisis turbocharging: methane concentrations are rising faster than ever