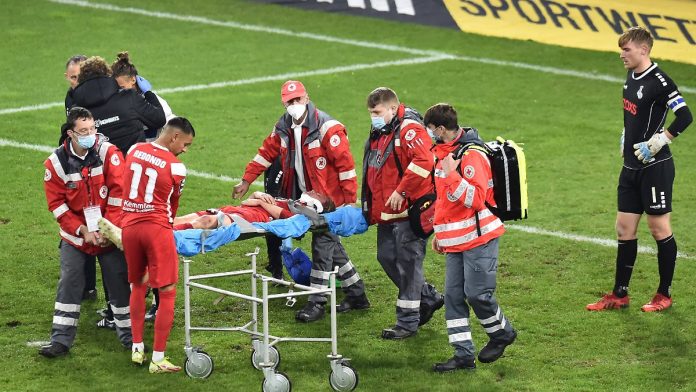 Gotze now plays with a helmet

Felix Gotze sustained two head injuries in a short period of time, and now the professional footballer is drawing conclusions – and he will play with the helmet in the future. The brother of world champion Mario Gotze wants to quickly get back on the field.

After two head injuries in the space of a few months, Felix Gotze of the third-division football club 1 FC Kaiserslautern will play with a helmet in the future. “He has to do it now,” FCK coach Marco Antwerp said on Friday. “We talked about it again this morning. It will give him a certain degree of safety in the match.” “He has the opportunity to have a made-to-order product. Until then he’ll cover time with a rugby helmet.”

Goetze, 23, suffered a concussion last Monday in the match played at the MS Arena in Duisburg in a collision with his opponent. “A big thank you to the doctor from MSV, who responded very well and was cautious and was able to stabilize Felix immediately after his departure. We are pleased that he is conscious and can be taken to hospital quickly. Now we have to wait and see what the investigations show,” said guest coach Marco Antwerp after the match.

Mario Gotze’s younger brother fractured his skull in August. After colliding in the match in Victoria Berlin, he was taken to the intensive care unit of the Berlin Clinic for further treatment. This was followed by a break of several weeks and a return at the end of September in a match against VfL Osnabrück. Just a month later, a new setback, a new head injury. “Of course, the hesitation is bad,” Kaiserslautern coach Antwerp said.

Gotze will remain absent from the return leg against relegated Würzburg Kickers on Sunday. “Felix is ​​fine,” Antwerp said. “He has already indicated that he would like to play again. Of course we have to take into account his renewed head injury.”