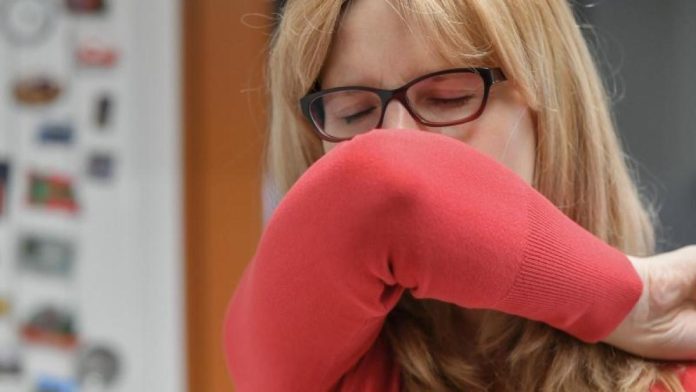 Acute bronchitis is one of the most common respiratory illnesses and is usually easy to treat. What you need to know about symptoms, duration, and treatment.

It is especially common in winter: acute bronchitis. In many cases, it occurs as part of a cold. At first you feel a slight cold symptom, then you get stronger and, above all, more stubborn.

Acute bronchitis can be bothersome and dangerous. The lower airways, or bronchi, become temporarily inflamed. The trachea is often affected as well. The disease is most often caused by cold viruses, such as influenza viruses, but in rare cases it can also be caused by bacteria, fungi, or infections such as whooping cough and chickenpox. Here’s everything you need to know about the symptoms, duration, and treatment of acute bronchitis.

Acute bronchitis: what are the typical symptoms?

The typical symptom of acute bronchitis is a cough. At first it is usually a dry, irritable cough, after which the inflamed mucous membranes of the bronchi produce a sticky secretion that is then expelled with a mucous cough. Coughing occurs mainly in the morning and evening, and many sufferers also wake up at night and have to cough hard. Pain behind the sternum can also occur.

Since acute bronchitis usually occurs as part of the common cold, symptoms such as headache, body aches, sore throat, hoarseness, and runny nose are not uncommon, especially in the early stages of the illness. Fever also occurs.

Here is an overview of possible symptoms:

Acute bronchitis: how long does the disease usually last?

Acute bronchitis, when it occurs to healthy people as part of a cold, usually ends after about two weeks. However, sometimes the cough can last longer, in some cases for weeks. If the cough lasts more than six weeks, you should see a doctor.

Acute bronchitis can also turn into chronic bronchitis. Doctors talk about this when a patient has a cough for more than three months at a time for two consecutive years. Chronic bronchitis is often exacerbated by smoking and can progress to chronic obstructive pulmonary disease (COPD).

In rare cases, acute bronchitis can develop into pneumonia in people with weakened immune systems or chronic disease of the heart or lungs. Hence, not only the mucous membrane of the bronchi is no longer affected, but the entire lung tissue.

In people with a pre-existing condition such as COPD or bronchial asthma, exacerbations can occur, which may have to be treated in hospital. Therefore patients at risk should ensure their recovery from acute bronchitis, and if in doubt, consult a doctor.

Acute bronchitis: what is the treatment for the disease?

Most of the time you don’t need to do anything with acute bronchitis as it clears up on its own after about two weeks. In these two weeks you should rest, for example avoid sports. If you smoke, you should definitely stop smoking while sick. Daily inhalation of saline can help, as well as plenty of water and unsweetened tea.

See also  Salmonella in Kinder Products: Six Searches in Belgium and Luxembourg in the Ferrero . Investigation

Antitussive or expectorant medication can also be taken to combat a cough, but not both at the same time, as they have opposite effects. Antibiotics are only useful in rare cases of acute bronchitis caused by bacteria. Discuss the procedure with your doctor here.

If you want to avoid acute bronchitis in the first place, you should try to avoid catching a cold. This can be done, for example, by washing your hands regularly and coughing into the fold of your arm rather than your hand.

We want to know what you think: So Augsburger Allgemeine is working with the opinion research institute Civey. What representative surveys are about and why you should sign up, I read here.

We need your consent to view the Civey survey

With your consent, external content may be displayed here that complements the editorial text. By activating content via “accept and offer”, Civey GmbH can store or retrieve information on your device and collect and process your personal data. You can withdraw your consent at any time using the slider. data protection

“It would have been impossible to imagine Moderna’s future without a...

3 indicates that the metabolism is too slow