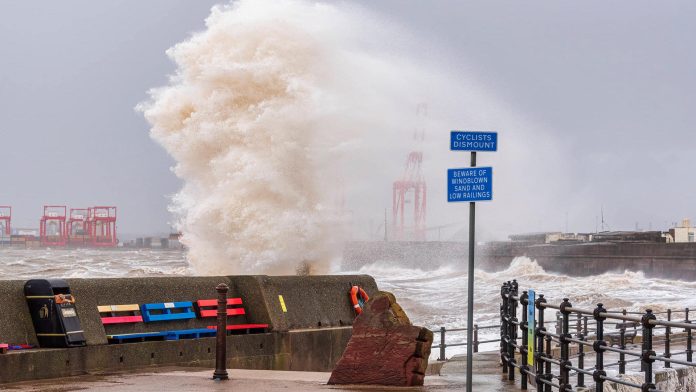 Canceled flights, fallen trees, covered homes: Storm “Zeinab” erupted across Europe. Hundreds of thousands of people in the UK have been affected by power outages.

The powerful storm “Zeinab” caused great devastation in large parts of Europe. Thirteen people died in Germany, Belgium, Great Britain, Ireland, the Netherlands and Poland on Saturday morning, mostly from trees falling on vehicles. Hundreds of flights, trains and ferries were canceled due to storm “Zeinab” with its hurricane-like storms in some areas and called “Eunice” in others.

The storm, which broke out over Ireland, moved through parts of the United Kingdom on Friday, then through northern France and the Benelux countries before hitting Denmark, Germany and then Poland on Saturday night. Record winds – close to 125mph in Britain – and torrential rain have uprooted trees, damaged roofs and caused flash floods. In northern Germany, the highest alert level was on Saturday morning.

Hundreds of thousands of homes without electricity

Many train lines in the affected countries, such as the Thalys between Amsterdam and Brussels, and large portions of long-distance traffic in the Deutsche Bahn, have been cancelled. Many flights have been canceled at major London airports in particular. Ferry traffic across the English Channel was also severely affected.

In Great Britain, more than 400,000 homes were still without power on Saturday morning, according to the network operator. According to local authorities, 194,000 families were affected in Poland and 37,000 in France. British insurers estimate the damage done there at more than 300 million pounds (360 million euros).

See also  With Turkey and the UN Security Council: Ukraine wants Germany as a guarantor of its security

So far, most of the dead have been in the Netherlands, where four people have died. Three people died in the UK, two each in Poland and Germany, and one each in Belgium and Ireland.

Suspicion of corruption in the European Union: what next?