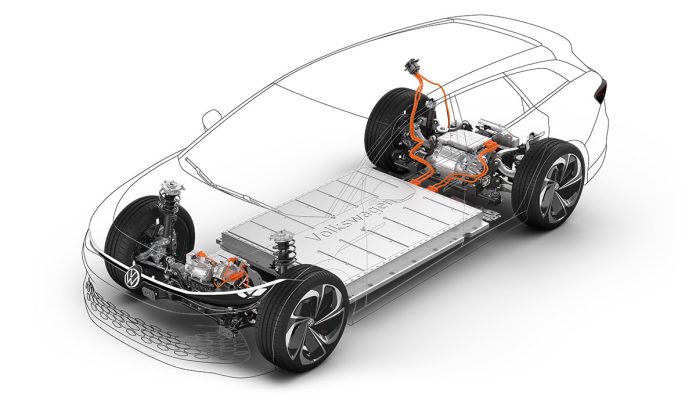 As announced, Volkswagen has established a European joint stock company (Société Européenne) to aggregate activities along the battery value chain. In the future, third parties should also be able to participate in SE as investors. The Wolfsburg-based company has not yet revealed the name of the company, but it has given more details about the planned activities.

The new SE unites areas from processing raw materials through Volkswagen’s development of the “standard cell” to the control of the European “mega-factory”, the group explained. New business models related to reusing old car batteries by recycling valuable raw materials were part of the area of ​​responsibility. This creates efficient and sustainable structures for the rapidly growing battery business.

Thomas Schmol, CEO of Volkswagen Group Components, and therefore responsible for the battery, charging and power areas, as well as in-house production of components: “We want to offer our customers high-performance, affordable and sustainable car batteries – and do so at all stages of battery value creation that are critical. To succeed. We are now pooling our strength at Salzgitter in order to drive innovations forward and acquire the best partners for our new company. We already have a strong battery team of more than 500 colleagues from 24 countries in Salzgitter – and we are also strengthening it at the management level.”

As part of its “New Auto” strategy, the Volkswagen Group wants to become the world’s leading manufacturer of electronic vehicles and, in the process, is expanding its battery activities into a core competence. In order to meet the growing demand for cells, the company plans to build six Gigafactories in Europe alone. Cell production at Salzgitter is scheduled to begin in 2025: the Gigafactory in Lower Saxony will manufacture unit cells for the group’s volume segment. In the first phase of expansion, the plant is scheduled to produce 20 gigawatt-hours of annual capacity; It is scheduled to double to 40 gigawatt-hours. A total of approximately €2 billion has been allocated for the construction and operation of the Salzgitter gigafactory until the start of serial production.

With development, planning and production control combined, the Salzgitter site will become the battery hub for the group, Volkswagen says. Spain and Eastern Europe are currently being discussed as other locations for the planned giant factories. Exact locations for Gigafactory 3 and 4 will be determined in the first half of 2022. Volkswagen plans to open two more cell plants in Europe by 2030.

In parallel with the establishment of these five major plants by the newly founded European stock company, Swedish start-up Northvolt, in which Volkswagen has a roughly 20 percent stake, is responsible for building another plant in Skelleftea in northern Sweden. It is expected to produce battery cells for the premium automotive segment from 2023 onwards.

The group confirmed that Volkswagen is pressing ahead with manufacturing battery technology at all stages of the value chain. The company last week signed two strategic partnerships with Umicore and 24M as well as a long-term supply agreement with Vulcan Energy Resources. It aims to produce and purchase raw materials as well as improve the production of cells in the planned giant factories. Partnerships must build knowledge in battery technology and cost management.