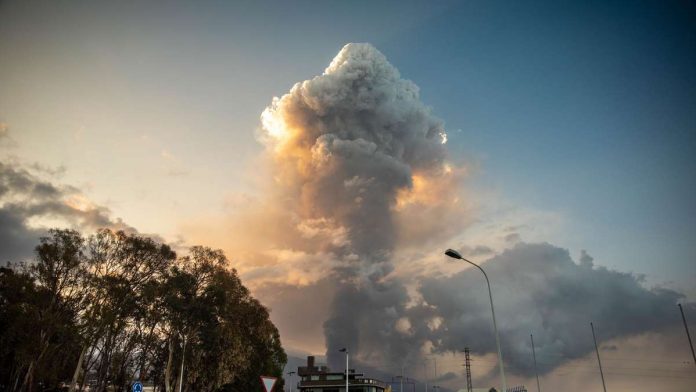 The volcano in La Palma shows no weakness. A second lava flow falls on the northern slope and destroys banana plantations. The current has not yet reached the sea.

La Palma – A new eruption occurred at the volcano in La Palma last night. Then a powerful lava flow fell near Takandi, the Involcan Canary Research Institute reported. “Breathtaking scenery” Involcan tweeted a video in which glowing red lava flows can be seen. Lava flows down a path created by previous currents. This makes it thicker and cools the lower it goes.

According to volcanologists, the various pyroclastic flows flowing down the slope of Cumbre Vieja have entered a phase of “stability and sluggishness”. The second flow that appeared on Sunday northwest of the volcanic cone also slowed significantly. On the edge of Mount Laguna in the south of La Palma, it moves forward only at a speed of two meters per hour. The lava tongue, which has a temperature of 1270 degrees, is now 160 meters from the sea. On Sunday, the lava mass was still rolling toward the sea at a speed of about 15 kilometers per hour.

The regional director of the IGN Geographical Institute, Maria Jose Blanco, said in the newspaper that banana plantations were once again devastated on Monday. the scientist Quoted. Meanwhile, according to data from the Copernicus satellite, which analyzes only buildings without specifying the type, 1956 buildings are classified as destroyed and 60 partially damaged or endangered. More than 760 hectares are covered by a meter-thick lava layer, of which 228.09 hectares are cultivated (128 hectares are banana plantations, 52 vineyards and 19 avocados).

Scientists still consider it uncertain whether the lava will reach the sea on Tuesday night with the current flow and speed. What is certain is that sooner or later the mass will reach the Atlantic Ocean and form a new cape. The main stream has been flowing out to sea for a good two weeks and creating a new cape there, which was already over 36 hectares in size on Monday. About 50 football fields are suitable for it.

Volcano in La Palma: No air traffic for the weekend

Meanwhile, flight operations resumed Monday in La Palma after a two-day break. But only for a few hours. Pinter airline had to cancel its last four planned flights due to ash on the runway. The island’s airport remained operational over the weekend, but volcanic ash increased dangerously. Airlines such as Binter have canceled flights.

Despite the difficult situation on La Palma, the island is trying to maintain some naturalness. For more than a month, children in one of the hardest-hit areas of the Aridane Valley have been back in school for the first time. The start for more than 4,500 pupils and 600 teachers took place under difficult conditions – in gray rain – according to local media. They were kind of locked in their classrooms. Because of the poor air quality, windows and doors had to be closed. Breaks in the school yard are taboo. When leaving class, children were required to wear masks, goggles, and hats with FFP2 visors. It is unclear when the volcano will stabilize. Once in The volcano takes a ghostly break a. (Ml) *Mercur.de is a show of IPPEN.MEDIA

Liz Truss: Will the British Prime Minister fall this week? ...