Home World ‘Volcanic bombs’ in La Palma: the next eruption on Cumber Vieja –... 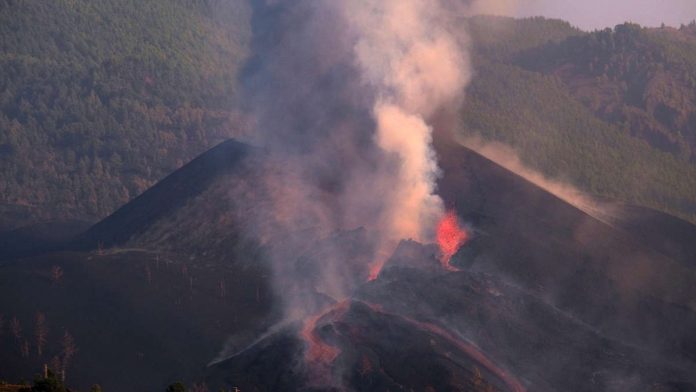 The volcano in Cumbre Vieja in La Palma is restless. The lava flow towards the sea becomes stronger and blocks of lava are thrown over the island.

Update on Tuesday, October 5, 2021 at 2:56 pm: The outbreak was at Cumbre Vieja in La Palma two and a half weeks ago – so it washed away the tourist areas. In the center of the exclusion zone is Puerto Naos, in fact a popular vacation spot. Right now, you can only see “black ash as far as the eye can see” there. Spiegel.de reports. The volcano is currently emitting huge clouds of smoke and ash. Then it drops its contents onto the island. Puerto Naos is currently not allowed to enter without permission from the authorities.

Meanwhile, the Canary Institute of Volcanoes Involcan is providing information on so-called “volcanic bombs” – football-sized lava rocks that have been thrown hundreds of meters above the island and into the sea. The volcano becomes more active again, and the molten rock reaches the sea, where it solidifies. To date, a peninsula of more than 33 hectares has been formed. But this continues to grow. Experts are currently unable to predict how long the Cumbre Vieja eruption will last in La Palma. However, it may take weeks.

La Palma: Volcano cone collapse – another earthquake on the island

Update from Tuesday, October 5, 2021 at 6.42 a.m.: The cone of the volcano on the Canary island of La Palma has partially collapsed, and the lava flow has intensified towards the sea. Spanish state television station RTVE reported on Monday that hot rocks over 1,000 degrees were tumbling down a slope on the same track as before. So additional evacuations weren’t necessary at first.

See also  Donald Trump: The border wall with Mexico appears to have been badly damaged by desert rain

In Madrid, Prime Minister Pedro Sanchez announced an emergency program with aid payments of 206 million euros. Since the eruption began, lava has destroyed more than 1,000 buildings and wreaked havoc on agriculture and infrastructure. More than 5,500 people were forced to leave their homes.

La Palma: the volcano is now “more aggressive” – ​​earthquake on the island again

Update from Sunday October 3, 2021 at 8.45am: The land in Cumbre Vieja in La Palma is restless. According to the authorities, the volcano that erupted on the Canary Island two weeks ago is now “more aggressive”. More fissures were opened on the mountain, from which lava spurted out and flowed towards the sea.

During the night, the island of La Palma was hit by more earthquakes. Authorities have recorded seismic activities with a magnitude of 3.5 on the Richter scale a total of eight times. According to experts, earthquakes of this type indicate more volcanic activity in the coming days.

Update from Saturday October 2, 2021 at 8:10 PM: About 3,800 residents of directly affected areas are allowed to leave their homes just two weeks after a volcano erupted on the Canary island of La Palma. Local authorities cited the reason for this as an improvement in air quality, particularly in places where curfews have been imposed in the past few days. These include the cities of Los Llanos, Tazacorte and El Paso in southern La Palma.

However, a stream of hot lava is making its way over La Palma. Authorities said lava, which reached nearly 1,000 degrees Celsius, destroyed more than 1,000 buildings. Since then, 6,000 residents have been evacuated in several villages. “Here you can see a lot of people crying all the time,” German news agency DPA quoted an elderly man at the site as saying.

First report on Saturday, October 2, 2021 at 4:29 pm: La Palma – A new lava flow is making its way on the Canary island of La Palma. In about two weeks Volcano eruption in Cumber Vega* Form a new creek on the slope of the mountain. This was reported by Agence France-Presse, referring to information from the Spanish Institute of Geology and Mining.

Due to the constant activity of the volcano in La Palma, curfews have been imposed on two sites. Los Llanos de Aridane and El Paso citizens are not allowed to leave their homes until further notice. The reason is the poisonous gases that could have been emitted from the volcanic eruption. This is stated in the online version of ARD Tagesschau. About 3,500 people were reportedly affected by the curfew.

Volcanic eruption in La Palma: lava reaches the sea around the island

Since the beginning of the current eruption in La Palma, more than 80 million cubic meters of lava have been released. This was stated by the head of the Canarian regional government, Angel Victor Torres. Last week, lava reached the sea surrounding the island for the first time. Since then it has formed an area of ​​more than 20 hectares. This continues to grow and significantly expands the island of La Palma. If lava hits water, it cools quickly. This produces large amounts of smoke and toxic gases, which is why a 3.5-kilometer safety zone has been established.

So far, the people of La Palma Island descended lightly. There were no wounded or dead. 6,000 of the island’s population of about 85,000 had to be evacuated. Air traffic to the island, popular with tourists, had to be suspended completely at times. The lava also destroyed hundreds of buildings and hundreds of hectares of banana plantations.

Volcanic eruption in La Palma: The last eruptions were a long time ago

The volcano last erupted in 1971 and 1949. A total of three people were killed in these outbreaks. Two of them died after inhaling harmful gases. (Dil/dpa) * fr.de view from IPPEN.MEDIA