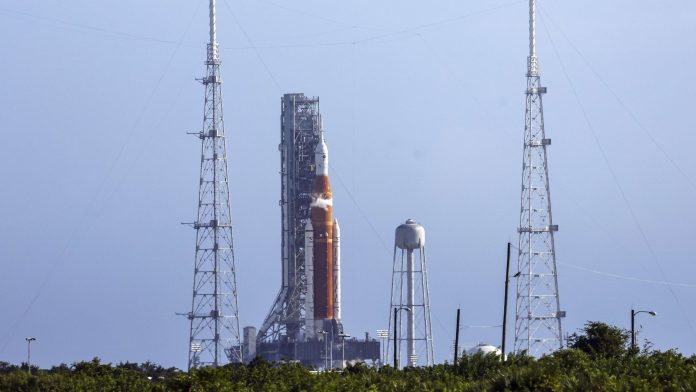 The second attempt was also unsuccessful: a few hours before the planned start, NASA canceled the unmanned test flight of the “Artemis I” mission again. A fuel leak was previously detected.

The US space agency NASA also thwarted the second attempt to launch its unmanned lunar mission. A spokesperson for Artemis said I launch manager Charlie Blackwell Thompson canceled the attempt. The reason was a leak that could not be closed. A few hours before the launch of the rocket, it was discovered on a tube that was supposed to be used to pump about three million liters of hydrogen and liquid oxygen into the tanks.

The team started refueling when the overpressure alarm went off. The process stopped and then continued. But minutes later, hydrogen leaked from one of the rocket’s engines. Hours of trying to solve the problem failed.

Three hours before the start time window began, it was then canceled. At the time, the hydrogen tanks were 11% full, NASA said.

The start is planned in a two-hour time window of 8:17 PM GST. Before setting a new date, technicians must first evaluate all data and fix the problem. According to the Associated Press, there will be no possibility to start for two weeks from Tuesday. If the missile needs to be returned to the hangar for repair, the new launch date will likely be pushed back to October.

See also  Czech Republic: a tree crashes into a car - two dead, two children survived in the back seat

Technical difficulties had already prevented the scheduled launch of the rocket into space on Monday. At the beginning of the week, a faulty sensor in the engine and a fuel leak – somewhere other than now – stopped preparations to start. However, NASA announced that all problems have now been resolved.

The Orion space capsule will be launched from Cape Canaveral Spaceport with the help of a heavy Space Launch System rocket, then orbit the Moon and land again in the Pacific Ocean about 40 days later. The Artemis I test flight is also working on the ability to send people back to the moon within a few years with the Artemis II mission. If the project is successful, astronauts should fly around the Moon again for the first time in 2024 on the follow-up “Artemis II” mission. As soon as possible, people should land there again with “Artemis III” in 2025.