Home World Ukraine: Russians arrive in Kiev – it looks like the army has... 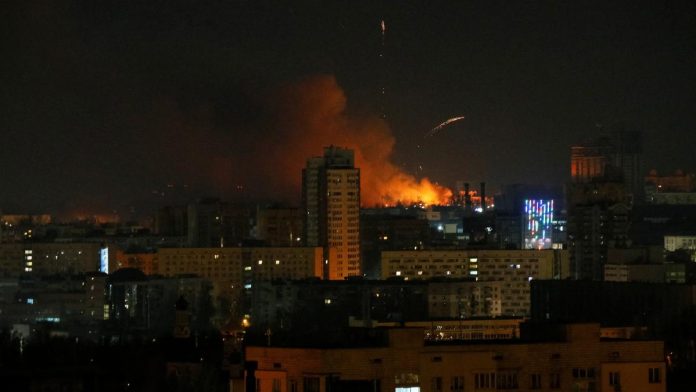 DrUkrainian authorities in Kiev warn of street fighting in the capital against the backdrop of the Russian invasion. “Combat operations are now raging in the streets of our city. We ask you to be as calm and careful as possible!” Anyone in a basement should stay there. In the event of an air alert, people should go to the nearest shelter. The city has released a map about it.

And there were reports of shooting and clashes from the outskirts of the capital on Saturday evening. A communications office of the Russian news agency said that Russian forces had tried to attack the No. 6 thermal power plant. The Ukrainian army was defending itself. The power plant is located in the far north-east of the megalopolis on the right bank of the Dnipro River. There were also reports of explosions and automatic weapons fire from other locations on the right bank.

According to the Ukrainian army, Russian troops attacked a barracks on the left bank. The attack on the post on Victory Street in Kiev was repulsed. There is no confirmation of this at first. The barracks are about seven kilometers from the city centre. The pictures showed a bright light of fire above the scene of the fighting. Explosions and gunfire can be heard in videos shared on social media. An AFP journalist reported loud explosions in central Kiev.

>>> All developments in Ukraine in the live broadcast tape <<

Through an airborne operation, Russian forces are apparently trying to take control of the Vasylkiv military airfield south of Kiev. The mayor of the small town, Natalia Balasinovich, told Ukrainian media that Ukrainian soldiers were killed and wounded in heavy fighting. Several Russian paratroopers landed. “We have casualties. We have many casualties. Unfortunately, it’s 200.” The air base is located about 40 kilometers from the center of Kiev.

There was a similar attempt on Thursday to land at Hostomil airport northwest of the Ukrainian capital, but, according to the Kiev army, it was repelled. During the fighting for Vasylkiv, the Ukrainian army claimed to have shot down a Russian Il-76 transport aircraft with paratroopers. “Luhansk revenge 2014,” Chief of Staff Valery Zalushny wrote on Twitter.

Moscow: The Russian army seizes the Ukrainian city of Melitopol

According to the Moscow Defense Ministry, Russian forces have taken control of the small Ukrainian town of Melitopol in the southeast of the country. This was announced by Defense Ministry spokesman Igor Konashenkov this morning in Moscow. So the soldiers took all measures to ensure the safety of the population and “exclude the provocations of the Ukrainian intelligence and nationalists.” The city is located near the Sea of ​​Azov.

It was previously reported that Russian units first landed in Azov on the Sea of ​​Azov. Then they set out and finally occupied Melitopol “without resistance”.

And the Ukrainian side said, on Friday evening, that the city was surrounded and small groups of Russian soldiers entered. There were reports of fighting in the outskirts of Melitopol early Friday afternoon.

See also  Forest fires: the situation in Greece and Turkey is approaching the peak

There were reports of air strikes from eastern Ukraine on Saturday morning. The Ukrainian military said that areas near the cities of Sumy, Poltava and Mariupol were attacked from the air. Cruise missiles were fired at Ukraine from the Black Sea.

At the beginning of Saturday night, Ukrainian President Volodymyr Zelensky called on the residents to resolutely defend the city of Kiev. “The fate of the country is now decided,” he said in a video message on his Telegram channel.

“The enemy will use all his strength to break our resistance,” said Zelensky. “Tonight they are preparing to storm Kiev.” He called on all Ukrainians to “stop the enemy wherever possible.” Residents must remove all signs that vandals put on streets and homes. “Burn the enemy’s military technology with everything at your disposal!”

Klitschko: explosions in the evening at the power plant

The city’s bridges were secured by soldiers. There are checkpoints not only on the city limits. “I thank the people of the city for their willingness to defend the capital and the homeland (…)”.

According to Klitschko, five explosions occurred three to five minutes apart in the evening near a thermal power plant in the north of the city. Rescue workers are on their way there. A resident of the Trichyna district, where this power plant is located, wrote to the German news agency in the evening that heavy shelling could be heard. It is getting worse. “I hear strong bursts and explosions. It is very close and very scary.”

Russia launched a major attack on Ukraine Thursday morning. Within a few hours, the Russian ground forces advanced into the greater Kiev region. According to Kiev, 137 people were killed and hundreds more wounded on the first day of the fighting. According to the Ministry of Defense, 2,800 Russian soldiers were killed. Moscow has not yet provided any information on the number of casualties from the Russian side.

On Friday, Ukrainian information reported that Russian soldiers fired missiles at the area around the coastal city of Odessa on the Black Sea coast. The border guards in Odessa said that several missiles were fired from the sea at the border protection systems. The infrastructure in the Mykolaiv region was also affected. Several observation points were damaged. It is feared that Russian forces will advance to Odessa – a city of strategic importance.

After heavy fighting, Russian forces crossed the Dnipro River in southern Ukraine on Friday evening. This gives them access to the strategically important city of Cherson, the regional administration said. The enemy attacked with heavy forces and suffered heavy losses. But in the end, the defenders had lost control. The district leadership is doing its best to maintain order and save lives. The city of nearly 300,000 people plays an important role in protecting the port city of Odessa in the southwest of the country.