Home World The DHL plane broke into two after making an emergency landing and... 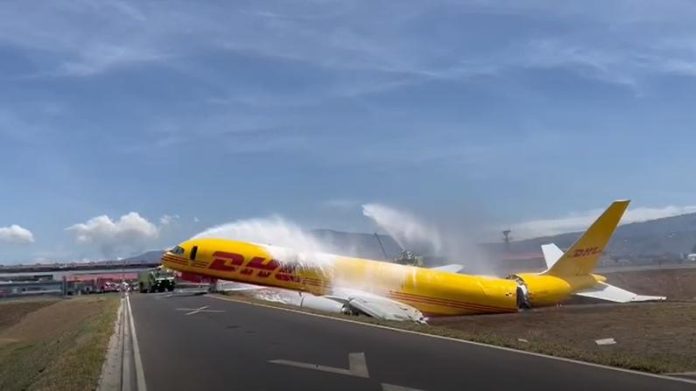 A DHL cargo plane has crashed into two after an emergency landing at San Jose Airport, Costa Rica. A Boeing 757 machine has experienced hydraulic problems, Costa Rica Fire Chief Hector Chaves said in a video message from Juan Santamaria International Airport on Thursday. The pilot and co-pilot were not hurt.

After landing, videos showed the plane landing on the runway, then turning right, picking up dust and standing low next to the runway with a crack near the tail. Firefighters used foam to prevent a fire.

RTL reporter Silk Haas was on her way to vacation in Costa Rica when her plane was grounded. “Ich habe mich mit meiner kleinen Familie schon auf die Landung nach dem langen Iberia-Flug von Madrid nach San José gefreut, als unser Pilot plötzlich meldete, dass er wegen eines Flugzeugunfalls nun casmütürich kreis eine” Your presence. “The runway still needs to be cleaned. He also said no one was hurt, but that made you feel a little sick in the air. After landing, about an hour later, we saw the plane that crashed into the middle DHL lying in a ditch by our right window.”

DHL emergency landing in Costa Rica: The pilot had to turn back due to an emergency

According to the newspaper “La Nacion”, the plane took off from the same airport in the direction of Guatemala City, but was forced to return. The pilot reported an emergency while in the air. Operations at the airport were halted for several hours. (dpa/bst)

See also  The Vatican has issued a new basic law: the Pope opens the highest offices in the Church to women