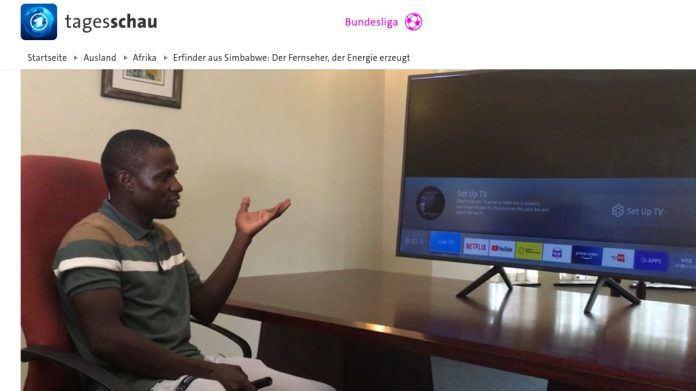 This invention would change the world…

On its website, Tageschau on Friday presented a supposed tech sensation: “TV that generates energy instead of consuming it.”

The TV is powered by radio waves, so it doesn’t need a power cable. And not only this: “Even if the TV is turned off, other things can be supplied with electricity through it.” Then the TV turns into a “microsonic device that generates power”.

The reporter from ARD studio in Johannesburg announced her contribution on Twitter with the words: “No cable, no extra radiation, no emissions, no raw material consumption. Seems to be part of the solution to the energy crisis.”

Problem: It sounds too good to be true – and it is.

Maxwell Chikombotsu, the alleged inventor, who detailed his word in the Tageschau article, is no stranger: Years ago he introduced an electric car that allegedly needed no charging because it was powered by magnetic waves and radio frequencies until one site put it up for sale for $499. The Associated Press and other fact-watchers have exposed the “sense” as fake news.

Didn’t the Tajischaw author know that? Didn’t anyone else on the Tageschau editorial team take notice of “Scientific Sensation” before it was posted online? BILD requested an NDR, but did not receive a statement on short notice.

But the author of “Tagesschau” doesn’t just seem convinced of the invention – she takes care of the story she didn’t pick up just because she came from Africa. A TV miracle could solve a lot of problems around the world if an inventor could only make his voice heard, Tagesschau wants you to believe.

Deutsche Welle (also by common law, but not financed by broadcast license fees, but by taxes) also took over and managed the contribution with the words: “This is a great idea already being implemented. But it hasn’t caught on yet. The inventor complains that this also has to do with part Too much racism.”

“The invention could set a precedent, but little attention is paid to innovations from South Africa,” the author regrets in her contribution. Chikombutsu ideas can be very successful. However, in large parts of Europe it is not even heard ”, writes the author.

Chikumbutso wants to “make its wireless television (…) accessible to rural people” in Africa. Further: “Scientists from Europe have yet to verify his invention. However, Maxwell believes that it would also be attractive to the Western world, for example to Germany.”

Chicombutsu invented something else: “Street lights that are no longer powered by solar energy but by radio waves – another invention of Chikomputzu. They are already glowing in Mexico and North America.”

Hours after her contribution was posted online and there was already a lot of mockery and criticism, the Tageshaw author admitted on Twitter: “Despite all my inquiries, I have not been able to contact scientists from the United States who, according to Maxwell Chikombotsu, have examined his alleged invention and must be verified. …and he claims he wants to develop that. That’s how I should have phrased it in the tweet.”

The post was no longer available on the Tagesschau website late Friday evening. The NDR newspaper explained: “After publishing we received criticism of the text, we passed it on to the author. The author reviews the information and asks us not to contact the article. We complied with this request.” The text “comes from a standard presentation of ARD Radio Reporters.”

The author of the article comes from SWR, All People’s Foundation Who will now save the new ARD chief Kai Gniffke.

A new discovery in Patagonia: a huge dinosaur with heeled sleeves